The Socialist Tragedy of Eleanor Marx 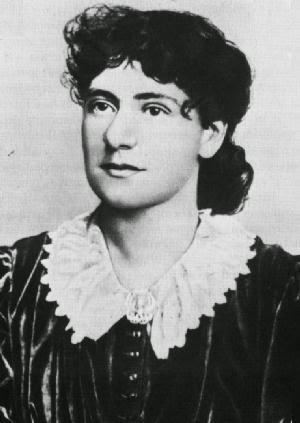 I was just musing on the life and afterlife of Eleanor Marx (1855-1898), daughter of Karl and at one time a great heroine of socialism. There is a new biography, by Rachel Homes, and I stumbled across a long, laudatory review in the August 22 TLS. This reminded me of my astonishment when I learned that some of my college friends had to read a two-volume biography of Eleanor in a British history class. I marveled that such a tome would even exist, let alone be assigned to undergraduates, but that was because I did not understand the hold that Eleanor Marx has on the imagination of certain left-wing women. A quick check of the Library of Congress catalog shows that they have on their shelves no less than ten biographies of Eleanor -- five in English, two in German, one each in in Italian, Spanish and Russian -- besides collections of her letters in English and German and two novels about her life.

I think it is because her life sums up both the grand hopes of the socialist movement in the nineteenth century and the dashing of those hopes; as the subtitle of one of those biographies has it, her life was "a socialist tragedy." At times she seemed to live the hopes of the revolutionaries for a different sort of world, one in which women could live as freely as men and all could break free of rigid social conventions. "Karl Marx was the theory, Eleanor Marx was the practice," one of her admirers wrote. But it was not to be.

She was raised by Karl and his wife Jenny a crowded, two-bedroom apartment with four siblings and a maid, home-schooled in atheism, socialism, history and literature. As a child of three she entertained her parents' friends by reciting long passages of Shakespeare. She was also political from a young age, weeping over the execution of the Manchester Martyrs in 1867 and writing letters to political figures.

Already in the 1860s female socialists noticed that male revolutionaries were surrounded by women whose domestic labor made their intellectual adventures possible:

Eleanor did not want to live like that; she wanted to be a revolutionary and intellectual herself, not a helpmeet. She refused to learn domestic skills, studying languages, mathematics and chess instead. At 16 she was accompanying her father on his travels as a secretary, meeting revolutionary figures and stretching her own intellectual wings. She was, some say, the son he never had.

Karl and Jenny tried to keep their daughters from marrying penniless revolutionaries, but since they rarely met any other kind of man, and had been raised to idolize such crusaders, they all did anyway. Eleanor fell first for Hippolyte Lissagary, a survivor of the Paris Commune twice her age. Since her parents did not approve, she moved away from home and supported herself as a schoolteacher so she could carry out research for Lissagary at night and make love to him on weekends. With Eleanor's help, Lissagary eventually finished his history of the Commune, and Eleanor translated it into English. The relationship was troubled, and Karl and Jenny kept putting pressure on Eleanor to move back home, which led to her first mental breakdown. In 1880 Lissagary went back to France and Eleanor was treated by a sort of proto-Freudian analyst named Dr. Horatio Bryan Donkin. After a year Eleanor recovered enough to begin attending avant garde plays and hanging around the British library, conversing with members of the Bloomsbury set.

In 1884 she met Edward Aveling, editor of left-wing journals, and fell in love again. He was still married to another woman, but they took up living together anyway, announcing that they were happy to set aside "all the false and really immoral bourgeois conventionalities." Most of her friends thought Aveling was a cad, and ugly to boot, but she was not deterred. Eleanor blossomed for a while, publishing the first English translation of Madame Bovary, translating and promoting Ibsen's dramas, writing essays on the Woman Question, and throwing herself into the convoluted politics of socialist parties. She  became involved with the Women's Trade Union League, helped to organize the Gasworkers' Union, and promoted numerous strikes. Meanwhile Eleanor and Edward put themselves out as the perfect socialist couple. Their relationship, Eleanor claimed, was about honesty and truth, discarding "the hideous disguise, the constant lying, that makes the domestic life of almost all our English homes an organised hypocrisy."

To me this faith that socialism would somehow reform sexuality and marriage has always been the strangest thing about the era of Revolution. I can see how people might hope for a transformation of economics or politics, but sex? And Marx called his opponents "utopians." But anyway that was the fashion, to think that overthrowing the bourgeois order would lead to, or involve, the restructuring of marriage and family on some more authentic basis.

As Eleanor discovered, it was all as much of a sham as bourgeois propriety ever was. She learned that the baby birthed by the family maid in her childhood was actually her father's, and that it was he who insisted the child be given away and never spoken of again. "Is it not wonderful," she wrote in a letter, "how rarely we seem to practise all the fine things we preach to others?"

Then Aveling turned out to be the cad her friends suspected: he had numerous affairs, and he kept up the lie that he could not marry her because of his estranged wife for years after the wife had died. When she confronted him about this, he told her that he was leaving her for a younger woman anyway -- in fact he had already married her. Eleanor was devastated:


On the morning of March 31, 1898, she wrote to her lawyer to change her will, sent the maid to the chemist for chloroform and prussic acid, donned her favourite white summer dress, took the poison, and died. She left a scent of lavender and bitter almonds, two suicide notes, and the money from Engels' legacy. Her friends thought Aveling had confiscated the letter, skipped out of the house, and lied at the inquest. He got the money and spent most of it on his wife in the four months before he died.

So Eleanor left the world much as her literary heroines Emma Bovary and Hedda Gabler had, in a dramatic protest against the cruelty of life. According to some of her friends, Aveling's betrayal was only the final straw in a long litany of worries, especially over the lack of political progress and the destructive infighting of left-wing groups.

She dreamed a beautiful dream of revolution, but could not make it real enough to heal her broken heart.
Posted by John at 8:19 AM