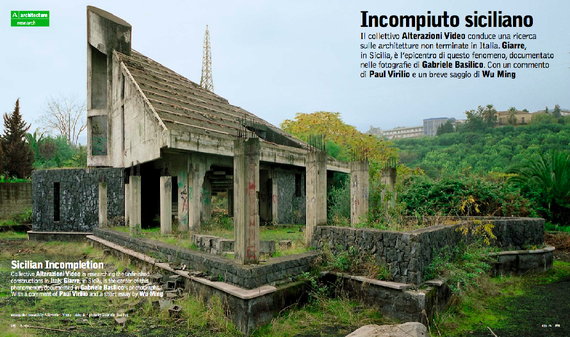 Modern societies have a habit of beginning public works projects that are never finished; the world is full of unfinished and never opened highways, ports, hotels, steel mills, stadiums, and everything else you can think of. But Italy is a special case. Two facts of Italian life that have been in place for decades make it the world capital of incomplete public monuments: a serious effort to reduce the economic disparity between north and south by public works spending in the south, and organized crime. Ask why any random building in Italy is unfinished and an Italian is likely to answer,"the Mafia stole the money," which is a shorthand way of saying that it disappeared into the corrupt networks that have long dominated Italian public life, especially in the south, and especially when finishing the building wasn't really the point anyway. 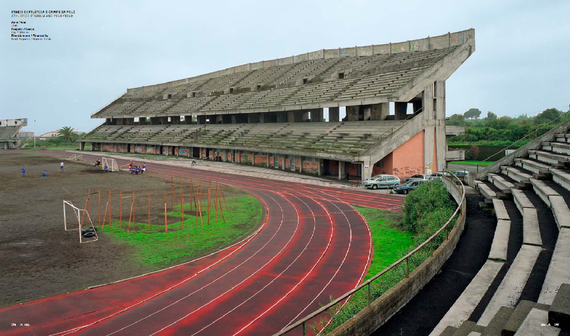 Now a group of Italian artists have turned this legacy of unfinished structures into an ongoing project they call L' Incompiuto Siciliano, a "multidisciplinary effort to interrogate the topic of unfinished public works projects in Italy." The chief discipline used in the investigations so far seems to be irony, and the manifesto is full of statements like

Which I think would mean


Sicilian Incompletion inserts itself into the landscape incisively and radically. The creation of unfinished public works celebrates the conquest of the landscape by modern man.


The self-congratulatory thrust of diverse Sicilian communities has created an architectural style that narrates multiple facets of the society that gave birth to it. Unfinished works are ruins of supermodernity, monuments birthed by the creative enthusiasm of Liberalism. 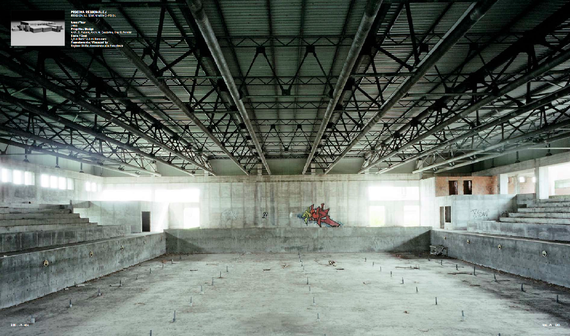 In the Sicilian town of Giarre, these artists have found what they say is the epicenter of incompleteness. This town of 27,000 has


25 incomplete structures built between the mid-1950s and the 2000s, many of considerable size, such as a vast Athletics and Polo Stadium, an unfinished near-Olympic-size Regional Swimming Pool, and a tumbling concrete palace known as the Multifunctional Hall. Their concrete shells are slowly being taken over by meadow grass and cacti, but they still dominate the landscape.

Amazing --and the perfect political joke. It makes me laugh, but it also makes a serious point about contemporary Italy. And finally a good use for the language of post-modern academia!
Posted by John at 7:13 AM