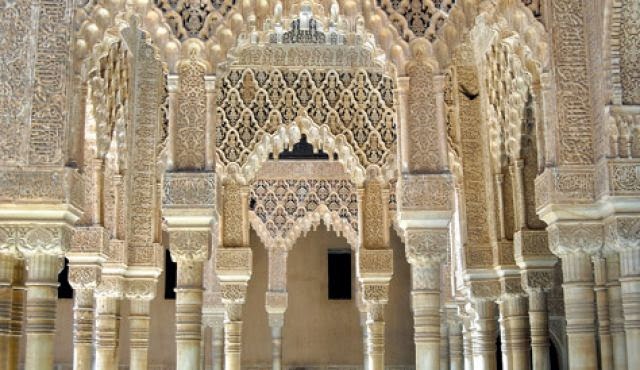 Brian Catlos is a professor of religious studies and an expert on the religions of medieval Spain. For centuries Spaniards were taught that their history was about the Reconquista, the long battle between Christians and Muslims for control of the peninsula that ended in Christian victory and the expulsion of the Muslims and Jews. Catlos does not see things that way. He thinks that medieval Christians and Muslims got along a lot more than they fought, even in the age of the Crusades. He marshals a great deal of evidence for his argument and I mostly agree, and even when I don't I felt that I got a lot out of this fascinating book.

Infidel Kings and Unholy Warriors: Faith, Power and Violence in the Age of Crusade and Jihad (2014) is a history of interactions between Muslims, Christians and Jews around the Mediterranean between about 1050 and 1200. This is the period when, some historians would say, more relaxed attitudes of earlier centuries hardened into violent religious hatred between the faiths. (Catlos disagrees, of course.) Rather than trying to write a continuous narrative he gives us a series of separate stories, each focusing on a famous episode of conflict or cooperation between members of different faiths. He begins in Spain with two tales of usurpers: Yusuf ibn Naghrilla, a Jewish minister who tried but failed to usurp the throne of a Muslim kingdom, and Rodrigo Diaz, the Cid, a Christian knight who succeeded. To understand how these events came about requires a great deal of background, dozens of pages showing how the Muslim lands came to be divided into several independent kingdoms, how they sometimes fought against Christian kingdoms but sometimes allied with them, how Jews and Muslims interacted, why Muslim kings had Jewish ministers, and so on, all of which I found fascinating. These narratives seem designed to show that things were really far too complicated to be captured by saying that Christians fought Muslims, or that Jews were oppressed. Catlos certainly does make everything seem complicated -- after some passages about byzantine intrigues, betrayals, assassination plots, ambushes, staged reconciliations, and more my head was spinning. Worse, Catlos cannot mention a person without giving his name, or say that something was done without saying who did it, and as a result these narrative sections contain hundreds of unfamiliar names. Which is too bad, because Catlos is a pretty good writer and I suspect he was hoping that his book would be assigned to a lot of undergraduates. I would not do so because most of my students would drown in this ocean of names and never figure out the point of what Catlos is saying. 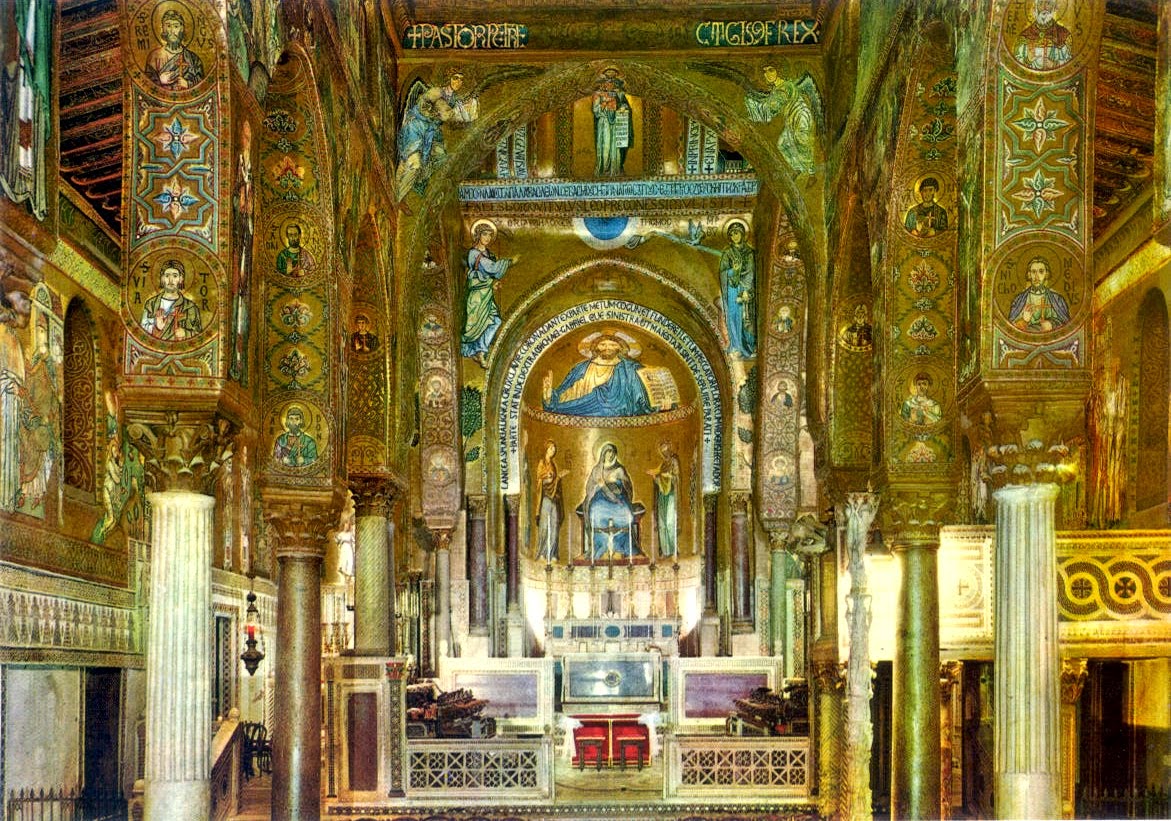 Catlos then moves on to Sicily under the Norman conquerors, a fascinating epoch of cultural mixing and religious tolerance. He treats in detail the tale of how a Sicilian ruler executed one of his ministers for the crime of being secretly a Muslim, which certainly seems like a sign of rising religious tension. Catlos shows how unusual this event was, and raises plenty of suspicions about the actual motives of all the people involved.

From there Catlos moves to Egypt under the Fatimids, a dynasty of Muslim heretics who kept themselves in power partly by playing every religious and ethnic group in their domain off against the others. Here the problem of names re-emerges, and since I had read hardly anything about this period I had to flip madly back and forth to keep straight who was who. Fatimid Egypt was in Catlos' telling a very cosmopolitan place, with thriving communities of Sunni Muslims, Shiite Muslims, Coptic Christians, Orthodox Christians, Armenian Christians, Sudanese mercenaries, Turkish tribesmen, Jewish merchants, and more:


The peoples of Greater Cairo were conscious of the barriers that separated them from one another, but nonetheless transgressed these barriers continuously. They consciously embraced ethno-religious ambiguity and diversity by intermarrying, socializing, and dabbling in one another's rites and rituals. (196)

The Muslim-Christian divide was only one of the ways in which the people of Egypt defined themselves and the nature of their society. Every person belonged to a range of communities -- religious, local, professional, and kin-based -- and membership in any could result in that person crossing religious lines or ignoring religious affiliations. The Christians and Muslims of Egypt were deeply integrated, and it was only because the politics, ethnicities, communities and religions of Egypt were entangled that mundane rivalries could be presented or imagined as epic religious conflicts. (223) 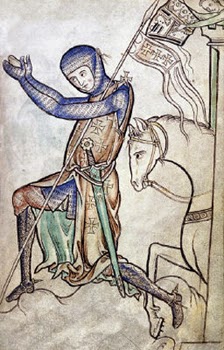 The last section covers the First Crusade and the history of the crusader states down to the conquests of Saladin. Catlos admits that the crusaders sometimes acted like religious warriors bent on exterminating people of other faiths. But he thinks that this was an anomaly, not just within Mediterranean history but even within the history of the crusade itself. He dwells, for example, on the long diplomatic friendship between the Christian Templars and the Muslim Assassins, the numerous other deals, pacts, arrangements between Christian and Muslim kingdoms and lords:


For all the efforts of historians of the past to present the Crusades as a unified spiritual undertaking in he service of a larger calling, the fact is that Crusaders were no less riven by factional conflicts, personal agendas, and ideological inconsistencies than the people they were fighting. . . . Like Samuel ibn Naghrila, the Cid, Roger II of Sicily, and Bahram Pahlavuni (Armenian Christian minister of Fatimid Egypt), they became creatures of a diverse Mediterranean world, even as they set out to remake it. (243)

It is a fascinating period of history, and Catlos' approach is entertaining and enlightening. I would caution, though, that it is not the only possible approach. I don't have any particular problem with the way Catlos presents any of his tales, but other people have told them quite differently. In fact, as Catlos admits on more than one occasion, the sources on which he draws present these tales with much more emphasis on religious conflict. It is certainly possible that the average chronicler, whether a Christian monk or a Muslim religious scholar, cared more about religious purity than the average king or minister in that conniving age. But the slant of those chronicles reminds us that some contemporaries saw the events Catlos narrates as something quite different from sordid palace intrigue. If people habitually interpreted political events in terms of religious conflict, is that not a historical fact in itself, and perhaps one of great importance? After all, we really do not know the details of these events with anything like the certainty that Catlos offers, especially when they concern backstairs intrigues in the courts of paranoid rulers. Maybe Catlos is right, but maybe the monkish writers were closer to the truth than he wants to admit. There are also numerous details that do not really fit Catlos' argument. Catlos does not even mention the finding of the "Holy Lance" during the siege of Antioch, an episode of religious fervor that some Christian chroniclers made out to be the key event of the whole enterprise. In his account of the Cid's constant side-switching Catlos mentions French knights who had come to Spain specifically to fight against Muslims on behalf of Christianity, and if they were not typical they certainly existed. Some people in the eleventh century may have been determined to get along with people of other faiths, or indifferent to the whole question, but plenty of others were belligerent and hostile. 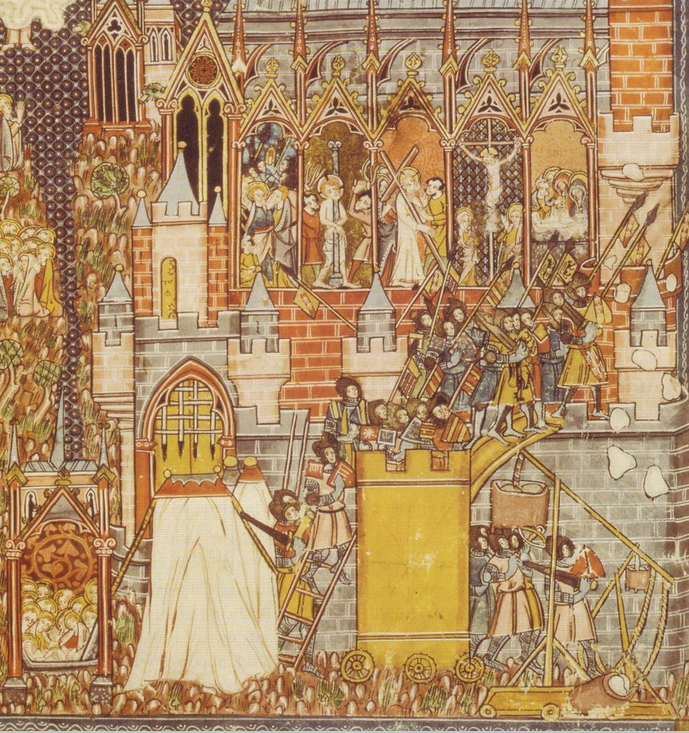 In a longer view, it is also worth noting that who won some of those wars between Christians and Muslims ended up mattering a lot. The difference between Spain and, say, Tunisia has a lot do with the Reconquista -- Spain became part of Christian Europe, while Tunisia remained part of the Muslim world. Catlos sometimes seems to imply that "holy wars" were just politics, no more or less profound than other wars, but that can't be quite right.

"What can we learn," Catlos asks in his conclusion,


from the history of the Crusaders and mujahidin who fought alongside unbelievers and against their own people? Of the kings and caliphs who staffed their administrations with heretics and infidels? And of the opportunists who cloaked their avarice and ambition in piety? Perhaps what they tell us is that for all its inherent chauvinism, righteousness, and moral certitude, we cannot blame religion for the violence of the past. (324)

That I can certainly agree with; after all, the violence between Christians and Muslims was only a tiny part of the violence of the Middle Ages, most of it enacted against neighbors of the same faith. But neither is religious conflict a side issue in history, and it certainly was not to many medieval people. Infidel Kings and Holy Warriors is a very fine book, but it is a book with agendas that go far beyond just trying to understand the past, and the reader should not forget this.
Posted by John at 7:39 AM