DNA from the Hungarian Plain


The international team of scientists examined nuclear ancient DNA extracted from thirteen individuals from burials from archaeological sites located in the Great Hungarian Plain, an area known to have been at the crossroads of major cultural transformations that shaped European prehistory. The skeletons sampled date from 5,700 BC (Early Neolithic) to 800 BC (Iron Age).

It took several years of experimentation with different bones of varying density and DNA preservation for the scientists to discover that the inner ear region of the petrous bone in the skull, which is the hardest bone and well protected from damage, is ideal for ancient DNA analysis in humans and any other mammals.

According to Professor Ron Pinhasi from the UCD Earth Institute and UCD School of Archaeology, University College Dublin, the joint senior author on the paper, "the high percentage DNA yield from the petrous bones exceeded those from other bones by up to 183-fold. This gave us anywhere between 12% and almost 90% human DNA in our samples compared to somewhere between 0% and 20% obtained from teeth, fingers and rib bones".

Using this trove of ancient DNA the investigators delved into several different questions. One of those making the news is that Hungarians showed no trace of adult lactose tolerance until the Iron Age, more than 4,000 years after they started dairying. Which is rather odd. Here's an interesting detail:


The Neolithic Hungarians are close to Sardinians (this has been replicated in study after study, so it's no longer a surprise when you find Neolithic Europeans that look like Sardinians). What is surprising is that one Neolithic European, designated KO1, is with the hunter-gatherers. . . . you would expect to find some hunter-gatherers in the earliest Neolithic communities in Europe as Europe wasn't empty land when the early farmers showed up. And KO1 appears one of those guys, "caught in the act" of first contact between the two groups.

So this KO1 person was genetically a native hunter-gatherer, but he was laid to rest in the cemetery of an intrusive neolithic community. Turncoat! Also:


According to Professor Dan Bradley from the Smurfit Institute of Genetics, Trinity College Dublin, co-senior author on the paper, "our results also imply that the great changes in prehistoric technology including the adoption of farming, followed by the first use of the hard metals, bronze and then iron, were each associated with the substantial influx of new people. We can no longer believe these fundamental innovations were simply absorbed by existing populations in a sort of cultural osmosis."

This is a tiny sample on which to base such sweeping claims, but we do have lots of other data now. As I have written here many times, the genetic evidence points to major population shifts throughout the past 10,000 years. No genetic study I am aware of supports the sort of very long term continuity that archaeologists insisted on in the 50 years after the Nazis made theories of invasion and conquest seem politically unacceptable. 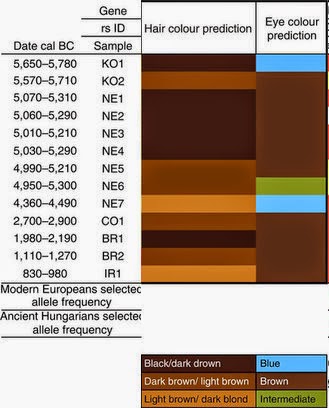 This is a graphic from the report with most of the confusing data about alleles taken out; it shows the predicted hair and eye color for the individuals studied.
Posted by John at 1:31 PM