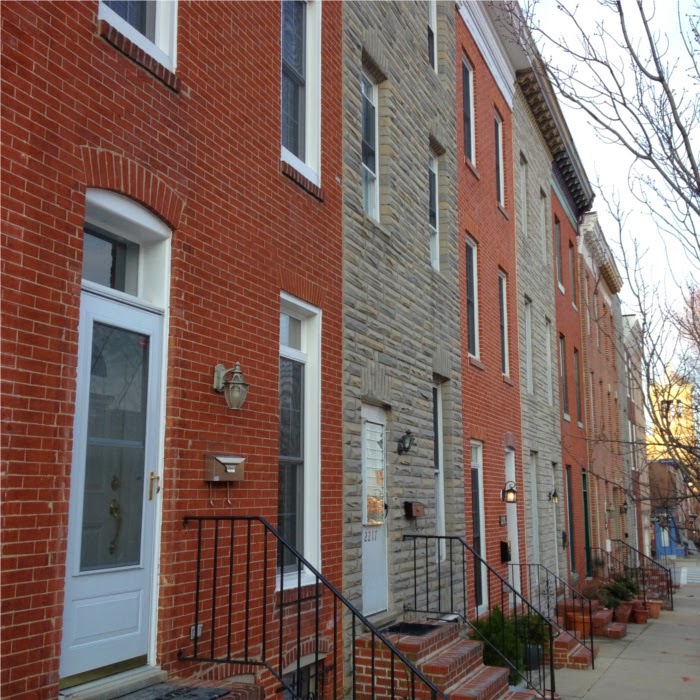 According to a new study from City Observatory, the number of young (25-34) college graduates living in city centers is up 37% since 2000, although the overall population of those areas has hardly changed. Dense, urban neighborhoods are the cool place to be. I am fascinated by this development. Is it just fashion? Is it because, as a real estate investor I know says, the affordable suburbs are just too far out now to be livable? (He expects that the next generation of slums will be suburbs an hour's drive from city centers.) Is it renewed environmentalism and a desire to bike to work and otherwise reduce carbon footprint a factor? Certainly there is a lot of evidence that young America's century-long love affair with cars has faded a little. Is it falling crime? Smaller families? A desire for lives that seem interesting rather than comfortable? All of those things? 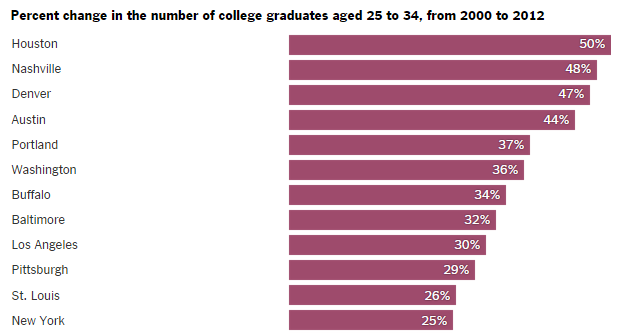 City Observatory also offers this chart showing which cities are doing the best at recruiting such people. I should note, though, that this chart represents change, and some cities like Minneapolis and Boston don't show up because they had a big growth in the number of college graduates they attracted in the 20 years before this chart begins and so have't seen as much growth since. The usual suspects dominate, but it's interesting to see Buffalo, Baltimore, Pittsburgh and St. Louis showing big growth in this category. As City Observatory notes, the cities that draw the most young talent are often the ones that do best over the next few decades, so all of those once dying places seem primed for renewed growth.
Posted by John at 6:19 AM

One factor I notice you didn't mention is cost of commuting.

Cars are expensive, car insurance for young people is very high compared to older folks, and gas isn't cheap anymore. If you can live in the city and get around without the costs of maintaining a vehicle, it can save you quite a lot of money.

$2.87? Goodness, you must be in a better portion of the country than I am!

Haven't seen anything under $3.45 for a good long while, and for a long while a couple years back we had to cope with $4.00+ gallons.

Just goes to show how cost of living can vary wildly with location, even within the same country or region. Of course, some cities are certainly expensive - New York is notorious for insane apartment prices, for example - but if you're saving $200 a month on car insurance, another $150 a month on gas, and whatever else on regular maintenance, paying $300 more per month on your home still is saving money.

Cities also tend to have a wider range of goods available, catering to a broader range of income brackets. If you're trying to survive on a shoestring budget, you'll probably eat better and cheaper in a city with lots of small family run businessesthan living somewhere with only two supermarkets to choose from, if even that.

We moved to the city because the suburbs aren't actually all that affordable anymore.

We shopped all over the Maryland suburbs and couldn't find anything that met our needs that also met our budget; in Baltimore City, we were able to buy a home with a large yard in a nice neighborhood for around 200K. In any of the Maryland suburbs that are within reasonable driving distance of our jobs, the only things available for that price are mold remediation cases.

I know this isn't necessarily true everywhere, but in many of the places I've lived since I was in my 20s, the city is the only reasonable choice of you're on a tight budget. Also, cities offer more rental options, generally speaking.