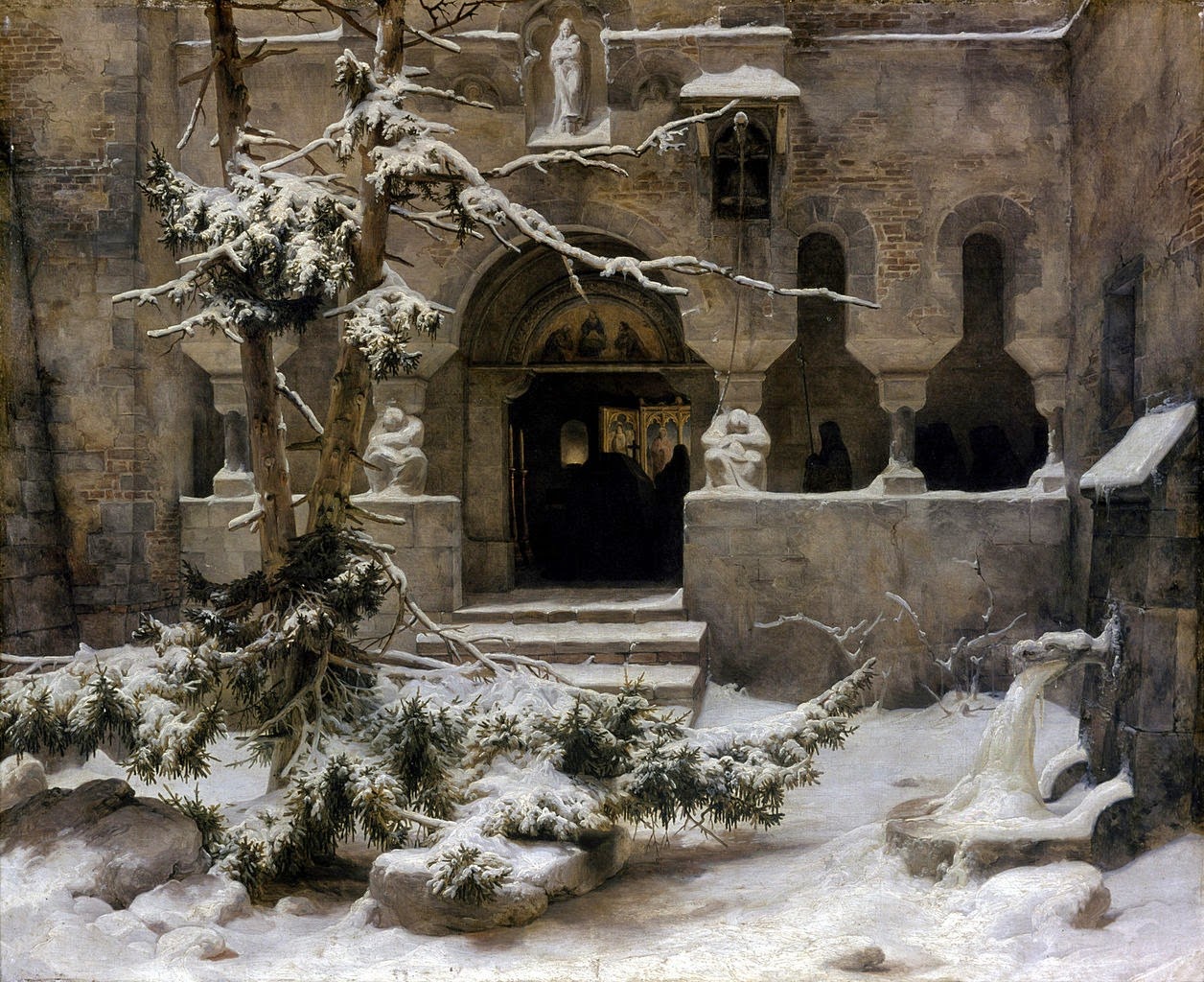 Carl Friedrich Lessing (1808-1880) was a German painter of landscapes and histories in the Romantic mode. He was born in Breslau, now in Poland but then in Prussia, where his father held a job that Google translate renders as "registrar of outdoor caste domination." His talent was recognized young, and after only two years at the Catholic gymnasium in Breslau he was sent to study in Berlin. In 1823 he entered the Academy of Arts. He had his first professional success in 1825 with a painting titled Churchyard with Tombstones and Ruins in the Snow. If my math is right, he was then only 17. I can't find a decent image of that painting so instead I give you Monastery Courtyard in the Snow, 1829. 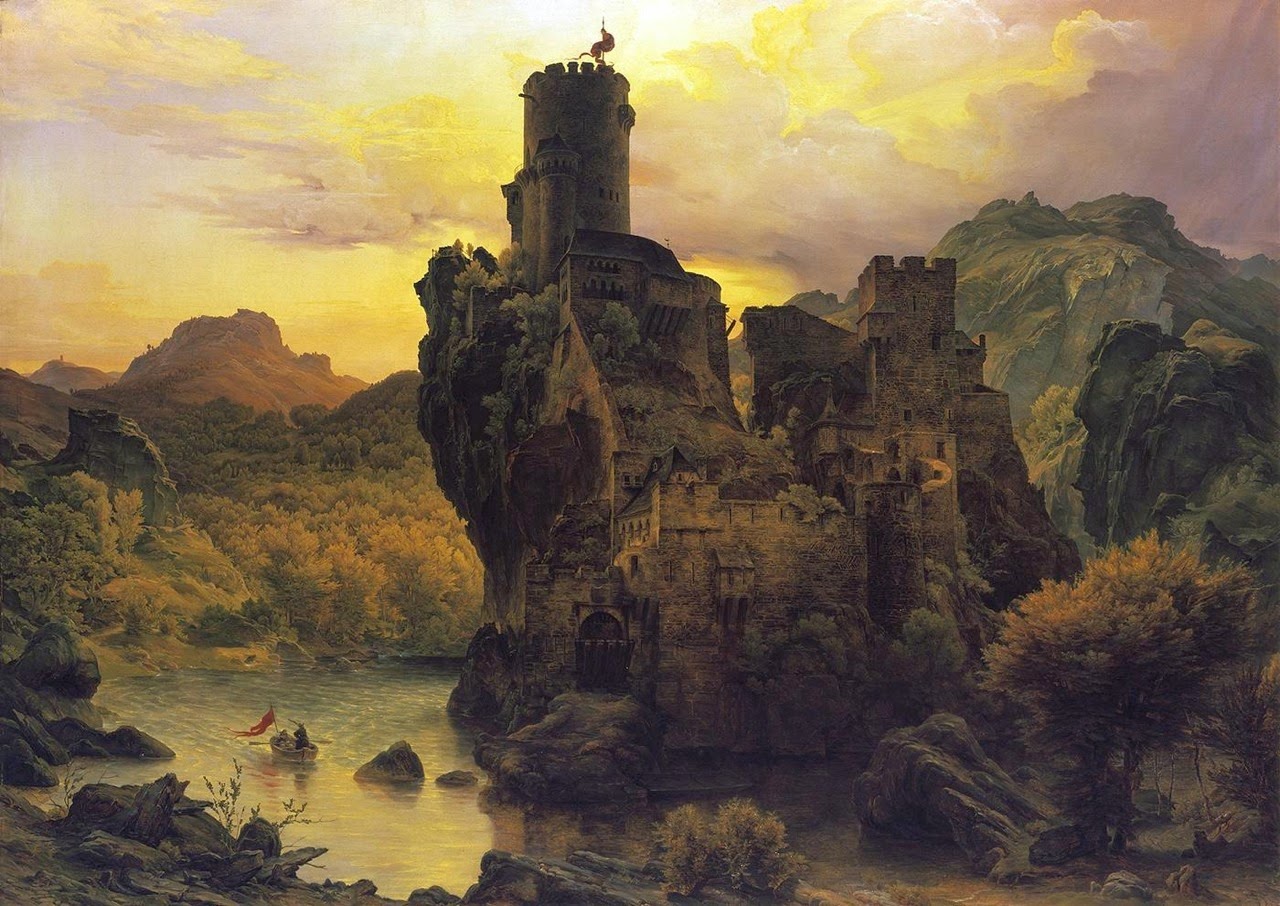 Remarkable how many of the paintings that show up in a search for Lessing's work were painted before he turned 25. Ritterburg, 1828 -- not sure if "Ritterburg" is a place or if the title just mean's "Knight's Castle." 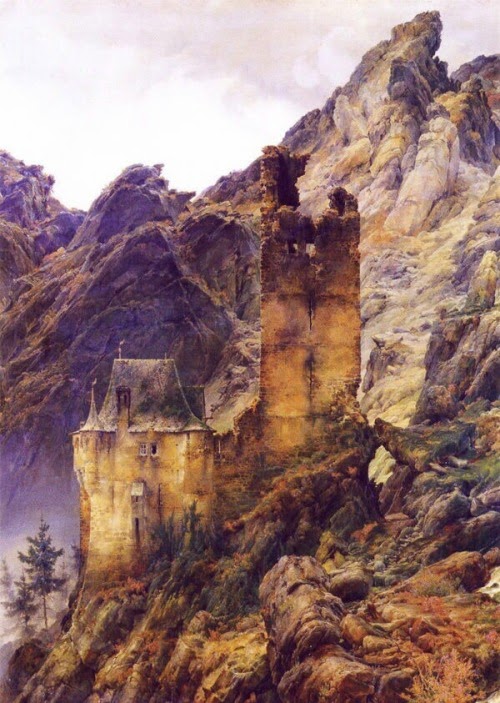 Of course the style of these early works is not particularly original. Lessing was following the path of blazed by Caspar David Friedrich and Johan Christian Dahl through the Romantic landscape, every stone whether natural or ruined charged with spiritual power. Rock Landscape: Gorge with Ruins, 1830. 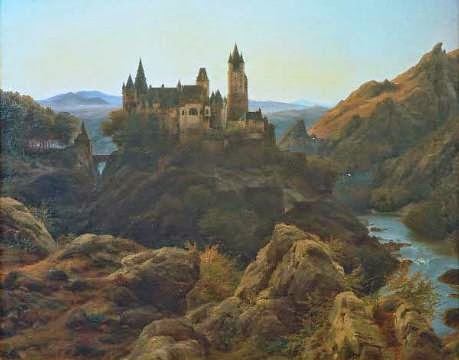 But original or no, Lessing certainly had great talent, and I think these are wonderful. Landscape with a Castle, 1832. 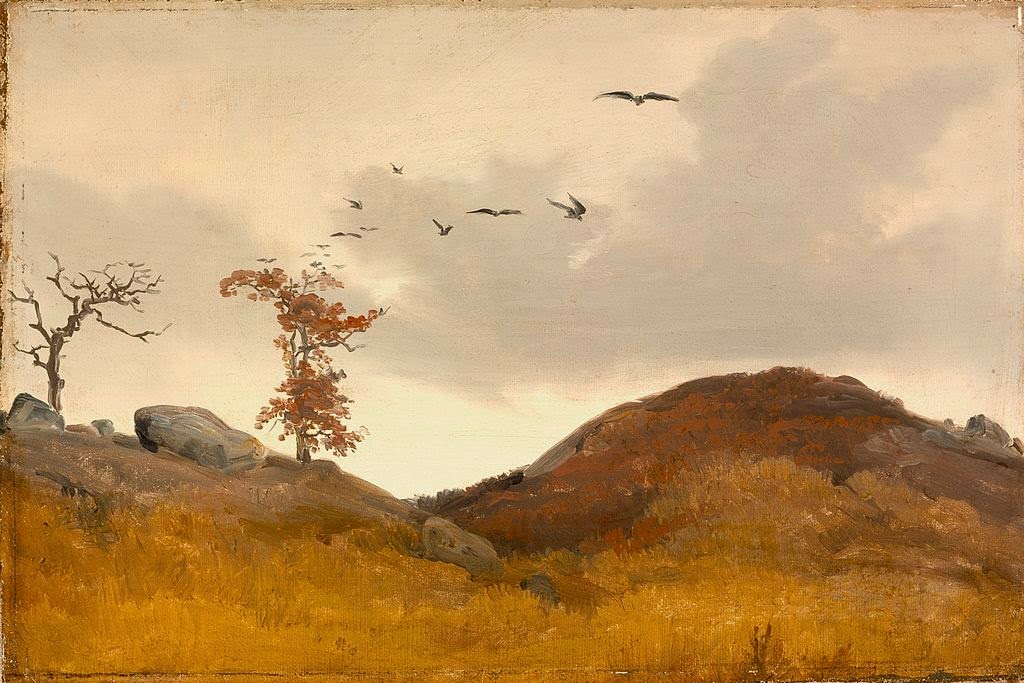 I especially love this: Landscape with Crows, 1830. 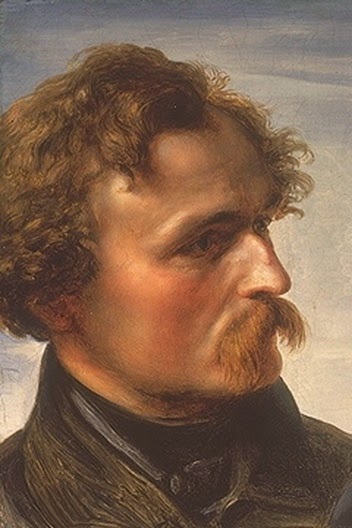 By 1834, at the age of 26, Lessing was selling paintings to the King of Prussia. Portrait of the artist in 1839 by Julius Hübner. A face like that never hurt an artist's career. 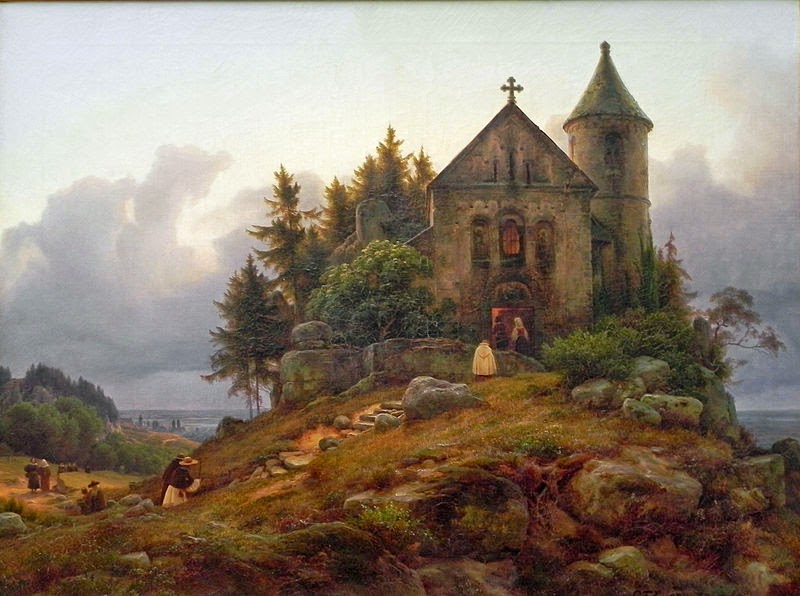 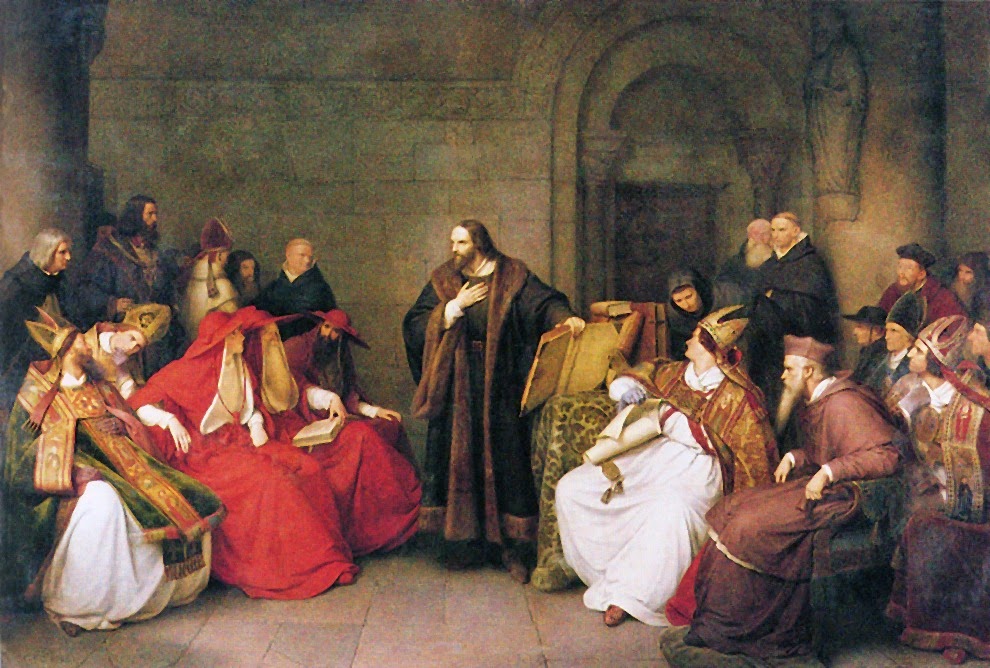 As he got older Lessing branched out a little and began doing history paintings. This is Jan Hus before the Council of Constance, 1842. 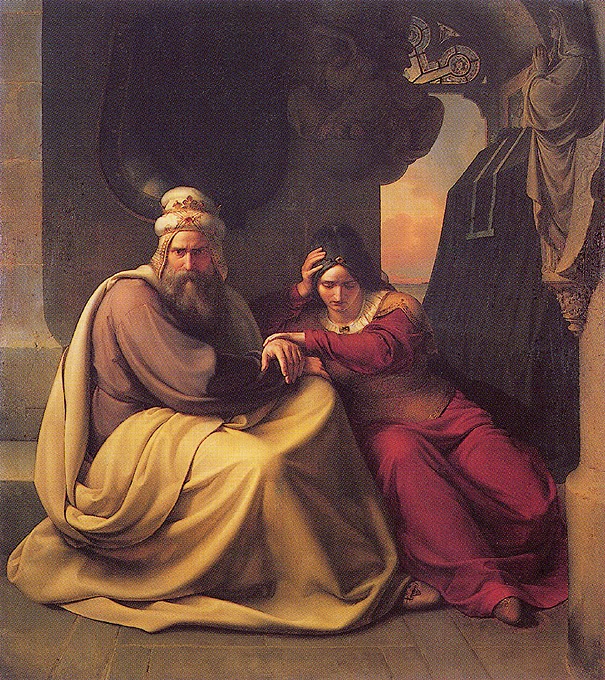 And also scenes from poetry and legend. Royal Couple Mourning their Daughter, 1842. 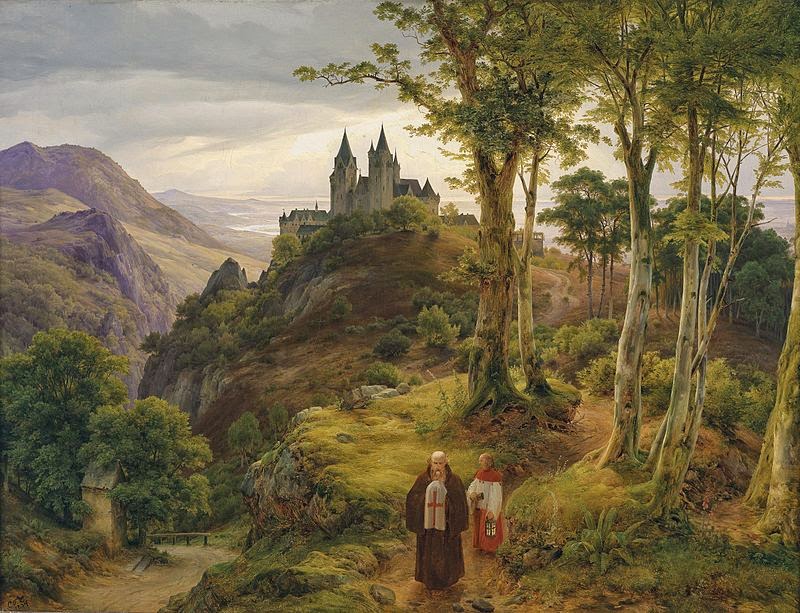 But it is for his romantic landscapes that he is best known. Above, Romantic Landscape with Cloister Garden; below, Castle Kribstein. 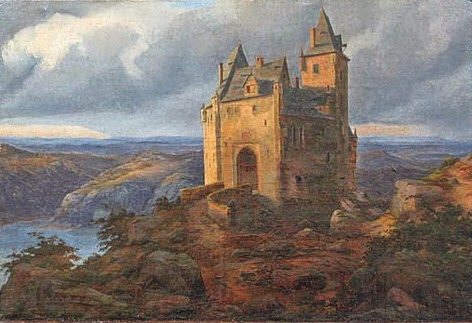