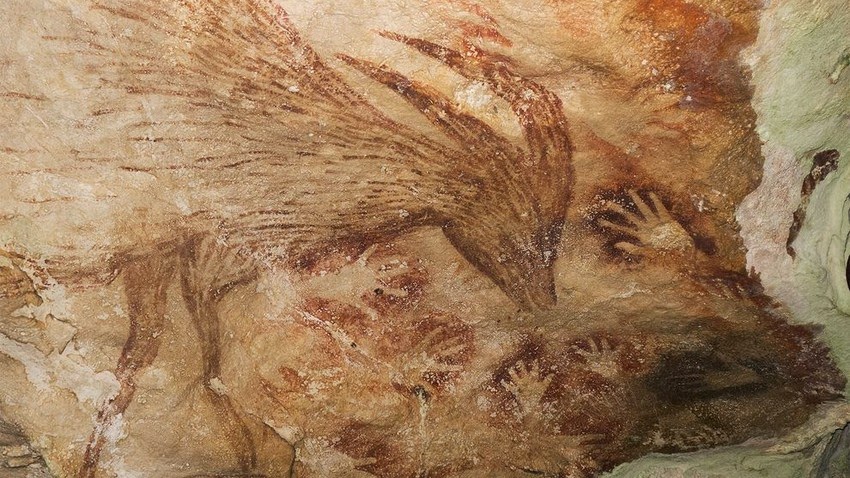 Very cool that some cave paintings from Indonesia have been dated to 39,000 years ago, as old as the oldest cave art in Europe. But I'm not sure why people are making such a big deal out of it. Humans have been making art for at least 75,000 years, and the genetic evidence shows lots of contact across Eurasia. The notion that art (or figurative art, anyway) was invented in 37,000 BCE always struck me as silly; given how little survives from that long ago, what are the odds that we would still have the first works of art? Plus art seems to be a human universal, which means it pretty much has to be as old as our species.
Posted by John at 7:28 PM

People in general like to think of things in terms of "firsts" and other temporal thresholds, with a neat and tidy little narrative that ignores nuance and complexity in favor of easily parroted half-knowledge. It's an annoying, destructive habit, but I have no clue how it can be ameliorated.

Part of it, I believe, is the wrong-headed tendency to believe everything old is new; another part is a common ignorance and lack of understanding of history in general and the historical record in particular; and a third part is a still rather robust Euro-centrism (or more frequently, Ameri-centrism) that leads us to marvel at perfectly ordinary human behaviors when told they are exhibited by peoples from less familiar cultures and more distant parts of the globe. It's an odd mixture of short-sightedness, self-absorption, and simple lack of education and critical thinking skills.

A story about the sorts of cave art Westerners are familiar with wouldn't attract much attention, but the moment you frame things in the "exotic" context of Indonesia, it becomes "interesting" to the Average Joe. Add in unusual animals like the babirusa (because Westerners are shocked and amazed to learn that there are other types of mammals besides the European and American species - "What the heck is a civet? Some kind of cat?"), and you've got a perfect click-bait internet article that practically writes itself.

It's vapid nonsense, designed to say nothing meaningful, yet to be just alluring and vaguely bemusing enough to any random person browsing through their Facebook feed to potentially garner a click through to the full story, and in turn garnering the associated advertizing profit.

Lowest common denominator and all that.