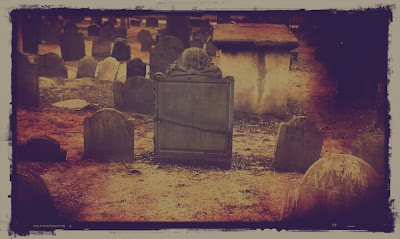 Great story by Abigail Tucker in Smithsonian about vampire panics in 19th-century New England. She begins from the strange burial of "JB", found near Griswold, Connecticut in 1990. JB was a man in his 50s buried around 1830, so called because of initials marked out in tacks on his coffin. His bones had been rearranged, and his head removed, about five years after he was buried. This led the investigators to tale of the Jewett City Vampires; in 1854, several corpses had been exhumed and tampered with in Jewett City, CT. And then they found Michael Bell, a Rhode Island folklorist who has made a study of these exhumations. Bell's book, Food for the Dead: On the Trail of New England’s Vampires documents more than 80 cases, beginning in the late 1700s, mostly in rural New England:


The particulars of the vampire exhumations, though, vary widely. In many cases, only family and neighbors participated. But sometimes town fathers voted on the matter, or medical doctors and clergymen gave their blessings or even pitched in. Some communities in Maine and Plymouth, Massachusetts, opted to simply flip the exhumed vampire facedown in the grave and leave it at that. In Connecticut, Rhode Island and Vermont, though, they frequently burned the dead person’s heart, sometimes inhaling the smoke as a cure. (In Europe, too, exhumation protocol varied with region: Some beheaded suspected vampire corpses, while others bound their feet with thorns.)

Often these rituals were clandestine, lantern-lit affairs. But, particularly in Vermont, they could be quite public, even festive. One vampire heart was reportedly torched on the Woodstock, Vermont, town green in 1830. In Manchester, hundreds of people flocked to a 1793 heart-burning ceremony at a blacksmith’s forge: “Timothy Mead officiated at the altar in the sacrifice to the Demon Vampire who it was believed was still sucking the blood of the then living wife of Captain Burton,” an early town history says. “It was the month of February and good sleighing.”

According to Bell, these incidents almost always correspond to tuberculosis outbreaks. I have to say that this makes me wonder, because tuberculosis is not the kind of highly contagious disease that has frequent outbreaks. It was endemic in Europe and America throughout this period, and most people were exposed to the bacteria. Only a minority got very sick. But clusters certainly do occur, and in a small town three or four serious cases at once might seem like an epidemic.

I know I am not a reliable barometer of contemporary American opinion, but it seems to me that the fear of the dead, I mean the real dread that they might be tormenting the living and sucking their life out, seems to have completely disappeared from our world.
Posted by John at 8:04 AM

indeed, though the fairly recent belief in visits by extraterrestrials and the comparatively antiquarian belief in deities, still persist. humans appear driven to use these tropes to their best advantage, whether that be for entertainment or to support murder and war.