Remembering the Lords of the Isles 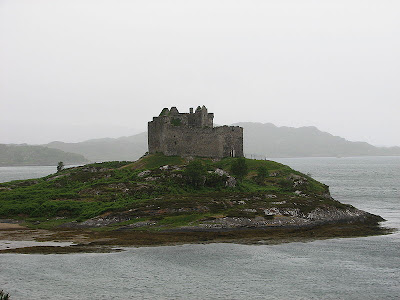 On Clan Donald, who dominated the Scottish Hebrides in the Middle Ages and remained a powerful family into the eighteenth century:


They were a proud and factious people who called themselves the Seed of Somerled -- steeped in the mythology of their race and counting their descent from Fergus Mac Erc who founded Albain Dalriada, and before that from Conn of the Hundred Battles who had ruled in the halls of Tara. And although their pride fed on a tradition which with time became more mystic than substantial, and their contentiousness echoed old ambitions that had crumbled long ago, theirs to sustain was the memory of a time when their forefathers were Lords of the Isles, rulers of the Hebrides and the Western Sea, sib to heroes of the Viking sagas, descendants of kings, and the inheritors of a Celtic tradition unspoiled by Romans, Angles, Normans, and the rest, who made the lowlands mongrel and created the system which ultimately brought the old true Celts to ruin.

Gaelic, they were dreamers, and they had dreamed while others, greedier and more canny, scavenged among the Lordship for their share. Revenge had been theirs, brief and bloody, when under Montrose they cut the Clan Campbell to pieces along the shore at Inverlochy. But dreamers yet, they had not understood Montrose's world; and dreamers still, they fought for the Pretender, and at Culloden found an end in blood and iron when Cumberland's artillery blew the clan to bits. And English government deported them. Gone the old valour, the nobility, wisdom, and defiance; and in their place an artificial and insipid preoccupation with the quaintness of the Highlands, which owed little to the fierce old legends from the western mists and much to the romantic fancy of a German-English king.

Culloden broke the fighting strength of the clans. The Clearances dispersed them. And with the recollection comes a sense of loss -- at what was once, and was so callously destroyed. Romantic sentiment suffuses the stark tragedy. The chieftains in their eagle plumes depart. The Gaelic battle banners dip and fall, and ghostly captains lead their swordsmen back into the western mist. The coloured plaids melt slowly into the autumn heather; the music of the pipes dies on the wind; and they have returned to that older world of Celtic twilight to which they first belonged.

Departed, but not yet into oblivion: for the memory remains and the old feuds are not forgotten. The old pride lingers, and can conjure still the story of an ancient race of kings ruling over a fierce and independent people -- whose many strongholds held inviolable their lands from Lorne to Kintyre, and who, ranging their galleys across the western sea to Ireland, Insigall, and Man, had the arrogance to style their scattered patrimony the 'Lordship of the Isles.'

The lands of Loren, and Argyll, and Kintyre bear witness to their passing. Their castles still rise stark and grim against the Hebridean sunset: Aros in Mull, and Ardtornish in Morvern; Sween the Mighty; Dunavertie of cruel memory; Dunyveg and Dunollia; Tioram that guards the narrows into Moydart; Eilean Mor Finlaggan, and Dunstaffnage of the king: these and many more whose stories are told in the runes of the Gael.

They are castles of the dead now. Their ruins crumble along the rim of the sea, watching over empty glens. No sentinel mans the tower to look for raiders on the tide, or listen to the Corrievrechan whirlpools. The sheilings are grass-grown and the peat fires are cold.

--Ronald Williams, The Lords of the Isles
Posted by John at 7:38 PM