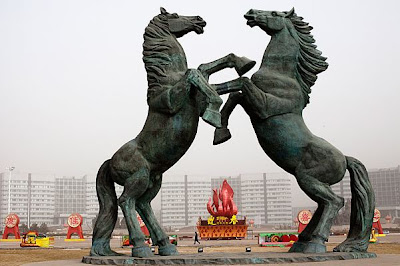 What if they built a city, and nobody came?

People who think China's economic growth is an unsustainable bubble are focusing on Ordos, a city in Inner Mongolia. The Chinese government built a whole new city here, the "Kangbashi New Area," adjacent to the old town. This new city has a core with imposing public buildings and monuments, a commercial district full of office towers, and housing for a million residents. 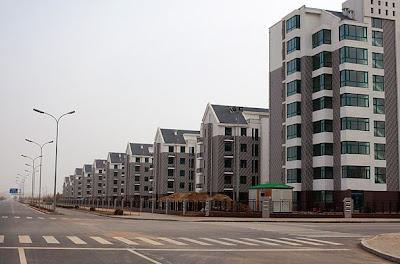 It is missing only one thing: people. The city is nearly empty, its only residents the people sent by the government to watch over the empty buildings. The BBC:


If you want to find a place where China's huge housing bubble has already burst, then Ordos is the place to come. The story started about 20 years ago, with the beginning of a great Mongolian coal rush. Private mining companies poured into the green Inner Mongolian steppe lands, pock-marking the landscape with enormous opencast holes in the ground, or tunnelling underground. Local farmers sold their land to the miners, and became instantly rich. Jobs burgeoned. Ceaseless coal truck convoys tore up the roads. And the old city of Ordos flourished as the money flowed in. The municipality decided to think big, too. It laid out plans for a huge new town for hundreds of thousands of residents, with Genghis Khan Plaza at the centre of it.

And so the city sits, empty, even as yet more new apartment buildings are constructed in the empty developments. In fact the government still plans to build 20 more new cities over the next 20 years. 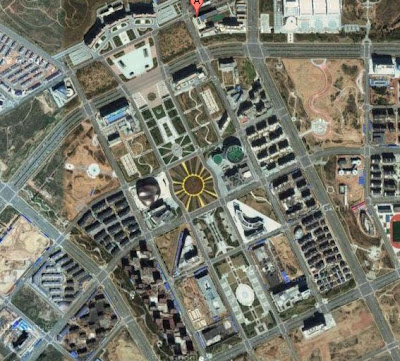 Note the complete absence of traffic on this Google Maps image of the city center.

I wonder if the city will eventually be inhabited, or if China's stabilizing population will continue to concentrate in the same places where people are moving now. After all, there are still a few hundred million Chinese people living in peasant huts, and eventually they are going to move somewhere.

See here for a cool video of young westerners skateboarding through the nearly empty city; more pictures here.
Posted by John at 1:52 PM