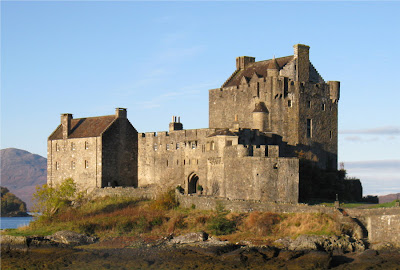 We started the second day of our Highland tour at Eilean Donan Castle. This is said to be the most photographed castle in Scotland, and you can see why it is on the cover of so many books and calendars. It's gorgeous and has a fabulous setting, on a small island where three lochs come together, mountains all around. Alas it is mostly reconstructed, as I will explain. 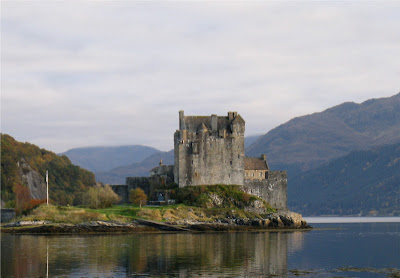 There was a castle here in the early 13th century, foundations of which were studied during the 1912-1932 reconstruction. The keep or tower house dates to that time, but the walls surrounded a larger area and the layout was different. In the late 1300s the castle was rebuilt with the walls enclosing a much smaller area, presumably so it could be defended by fewer men. Then in the 16th century a bastion or hornwork was added on the landward side, to mount canons. 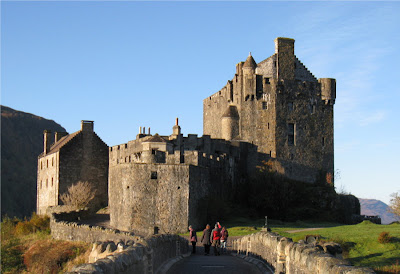 The castle saw occasional military action throughout its history, including in the 1715 Jacobite rebellion. Then in 1719 two shiploads of Spanish troops landed here, intending to incite another rebellion. They were defeated, and the British navy then blew up the castle with 340 barrels of gunpowder. 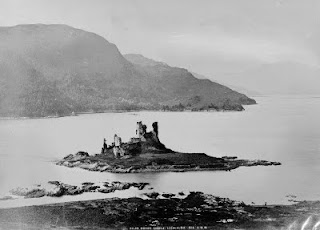 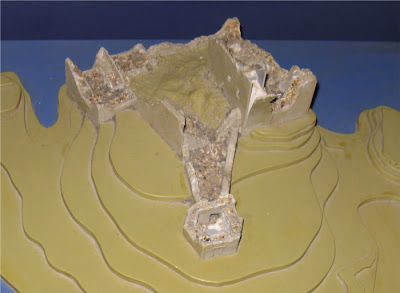 This is the model of the ruin in the castle display. You can see that the alignment of the walls and the arrangement of the buildings was known, but not much else. The very knowledgeable guide told me that there was enough information to establish the dimensions of the hall, on the second floor of the tower house. He also told me that there is a British military survey of the castle made in 1714, which gives the height of the keep and the walls. So the basic outside structure of the castle is right, although I have my doubts about that cute little round towers that make the keep so interesting. The interior of the castle, though, is mostly made up, and we didn't find it really worth the price of admission.