Adapting to the Little Ice Age 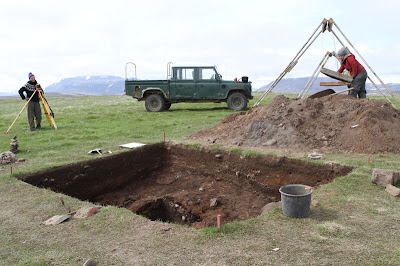 Excavations at a small farm on the north coast of Iceland show that the residents adapted to cooling temperature after 1300 CE by turning to the sea: the amount of bone from land animals in their midden declined, while there was a dramatic increase in the amount of fish and seal bone. They also changed their stock raising strategy, keeping fewer cows and more sheep. 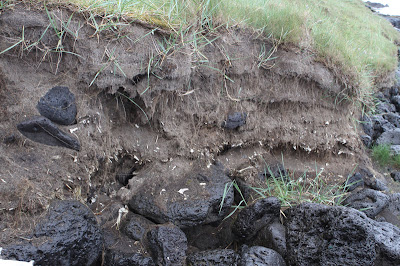 One of the problems with all arguments that blame the collapse of human cultures on weather patters is that people are adaptable. The population of Iceland held steady through the cold era, and while people were hardly rich they weren't starving, either. They just ate more fish. The picture above shows an enormous midden, a meter thick and extending for hundreds of meters along the shore, left from the air-drying of cod caught in Iceland and destined for the European market.

Climate change would only create crises for human cultures if there was some reason why the people could not adapt -- for example, if their large population was pushing so close to the ecological limits of their environment that even a small shift could cause catastrophic short-term famines.
Posted by John at 12:18 PM