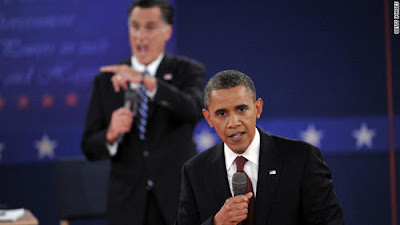 Now that my guy seems to have won the latest "debate," I can say what I think about these bizarre exercises. Why do we do this? Here's one of my favorite reporters, Dave Weigel, on one bit from last night:


As firey as that taxes-versus-record exchange was, it was basically two grown men repeating the bullet points from their campaign ads.

Yep. And you know, one thing the U.S. President never does as part of his job is debate. It is possible to defend all the speeches given in a campaign by noting that the President has to give lots of speeches, and he is going to be on television every time something important happens, so you are going to have to listen to him a lot. But Presidents never, ever debate.

I suppose some people think these events give them some insight into the President's "character." I've read this morning that Romney's performance last night shows that he is strong on issues where he has had time to prepare himself but easily flustered when taken by surprise, and I've read that the President's performance in the first debate showed that he really thinks he is just above it all and shouldn't have to defend his record to mere mortals like us. Sure. Whatever.

This morning there was a lot of chatter about an exchange over the Benghazi incident, in which Romney made a small mistake and Obama called him on it and this is supposed to mean something major, as if whatever happened in Benghazi is even worth discussing compared to issues like whether we should have intervened in Libya in the first place, whether to intervene in Syria, whether to pull out of Afghanistan, and so on. Anyone who takes these events seriously is trying to shortcut the process voters should go through, of learning about these men and their policies and their friends and deciding if that is the kind of leadership we want. If you want to cast your vote based on how people look in their best suits when somebody throws an "unexpected" question at them, go ahead. It's your vote to throw away.
Posted by John at 7:55 AM

It was a small factual mistake, but you really have to see it to see what the real mistake was. Romney did a very ugly thing politicizing the Bengazi attack, getting known facts wrong early. In the debate, the moment is clearly a moment of triumph on his face as he gets to politicize again the attacks, only to find out that the statement the president made was true.

The deeper failing is his willingness to press his attack even after being directly scolded for the prior calculated and dishonest attack. To continue trying to make polotical hay off the death of Americans. By basing his attack on right wing news media rather than the facts, Romney was not just wrong about a little fact, he showed that he trusted the wrong sources of information. If you want a moderate Republican, you don't want a guy who gets his information from Fox News.

I completely agree that Romney is a dishonest scoundrel, but this incident, as far as I am concerned, is a minor one compared to dozens of other things he has done in his career, and anyone who had been following his career would already know that he would say anything to get elected and seize any pretext to attack his opponent. The man is a cutthroat competitor who wants to win more than he wants to be an honest or upright person, or even a good Republican.