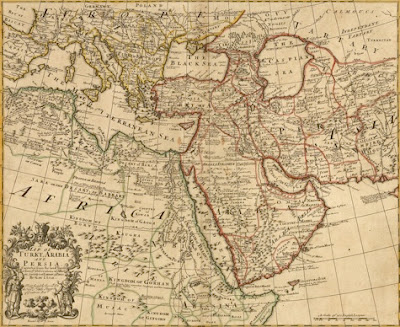 Our failure to turn Iraq and Afghanistan into peaceful democracies has fed a resurgence of "realist" writing about history. The basic thrust of this school is that things are as they are and there is very little you can do about it. Some realists favor culture as the great fact that cannot be moved, others religion. A big school focuses on geography. I have seen a lot of writing in this vein over the past ten years, most famously Jared Diamond's Guns, Germs and Steel. Nobody with any sense discounts the importance of geography; there are reasons why no empire based in Greenland has ever dominated the Atlantic world. But when you look in detail about any model of history that focuses on geography, you get mired in contradictions and special pleading. Adam Gopnik reviews several geohistorical books in the latest New Yorker, and he complains:


Are there any rules to this game? One moment, it’s great to have a protruding peninsular position, and the next moment it’s not, because living in a pre-Enlightenment society has traumatized you. Except that perhaps you have been kept pre-Enlightened because you are so near North Africa! But if Northern Europe’s ascent over Southern Europe was presaged by Charlemagne’s ascent over Rome, doesn’t this imply that the South made some kind of comeback in the long centuries between Charlemagne and the rise of the Eurovision Song Contest? What happened to geography, then? That’s an awfully long time for the magnetic pull of the north to have been in remission. If you compress and expand the time scale just as you like, you can make any event look inevitable. Elsewhere, Russia’s adherence to forms of authoritarian government is explained in terms of its cold climate and enormous size, the added proof presumably being that in Canada, too, one sees the same resistance to liberal institutions and the same trope toward authoritarian government. Right. So the Canadians, offspring of the British parliamentary tradition, have to be explained away as closet southerners clinging to the border.

Exactly. In general terms, yes, the geography of Europe, China and Japan seems to have been highly advantageous for civilization. But the details of which European countries dominated at which time cannot be explained by geography. One of the books Gopnik reviews goes on at great length about he catastrophe of the Little Ice Age, without pausing to note that it coincided with Europe's rise to world domination; whatever the bad effects of the cold climate, European were fully capable of dealing with them. This was my favorite line:


Once, the sight of a Viking prow coming down a river was as terrifying a sight as any European could imagine. Now the Scandinavian countries are perhaps the most pacific in the world. Whatever changed, it wasn’t the shape of Scandinavia.

Geography shapes history, but does not determine it.
Posted by John at 1:26 PM