The Celts at Gordion: The Strange Things People Do with Human Bones 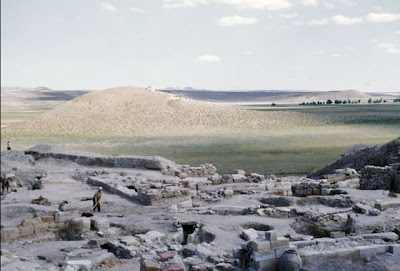 Gordion is an archaeological site in central Turkey, once the capital of Midas' Phrygian Kingdom. After 300 BCE, our written sources tell us, the place was occupied by an army of Celtic mercenaries who then raided widely around Anatolia. Archaeologists working at Gordion have found ample evidence of the site's other periods -- Phrygian, Roman, Byzantine -- but only hints of its occupation by Celts. 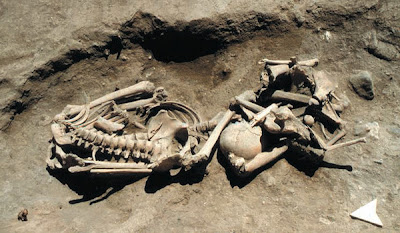 Until recently, that is. The evidence of Celtic presences comes in the form of human skeletons to which bizarre things have been done. The Phrygias, like the Greeks and Romans, had a horror of human bodies that led them to get them in the ground quickly and then leave them alone. 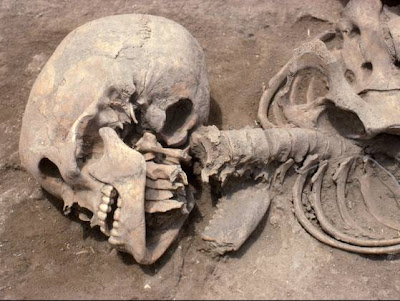 The Celts, in contrast, liked to do all sorts of strange things with dead bodies, especially their heads. The recent finds at Gordion include numerous beheaded bodies, bodies which had been buried with heads belonging to someone else (above), burials that included the mingled remains of different individuals, bodies that had been tossed haphazardly into pits after their necks had been broken, and so on. 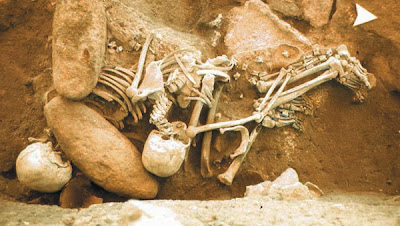 The excavators' description of the bones in one pit (above):


The uppermost body was that of a 30-45-year-old female who had been struck by two blows, which fractured her skull. Perhaps these blows did not cause her death, since she was also strangled, as a catastrophic angle in mid-neck attests. Beneath this body was that of a younger woman, aged 18-23 years. She shows no skeletal damage, but two heavy grinding stones weighing down her upper body do not suggest a peaceful interment. Resting to the west of the two women were the bones of a child aged 2-4, its preserved leg detached and reversed so that the knee rests where the hip should be. Because the entire body was disturbed and only partly present, we initially thought that much of the disturbance of small, light bones could be attributed to rodent activities. This relatively rosy picture disappeared when we found that the jaw, which appeared to belong to the cranium of the 2-4 year old, actually came from a 4-8-year-old child. Two neck vertebrae and a single foot bone also appear to be from this older child. It seems most likely that the children had died before the two women and that their bodies had decomposed, perhaps lying on the surface. We do not know why they were later deposited with the women. 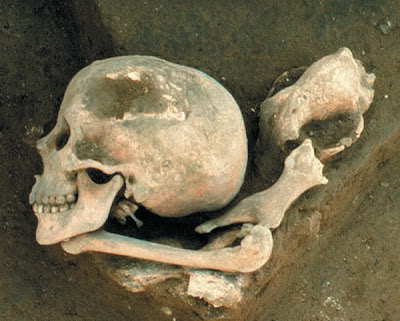 
In bone cluster 4, the skull of a teenager 12-17 years old was carefully placed above a dog skull, pelvic bone, and leg bones. At the bottom of this pile, which rested within a shallow depression, was a human pelvic bone from a 20-35-year-old male. Heavily weathered, it probably lay on the surface for some time before the rest of the bones were placed above it. The teenager, whose sex could not be determined with certainty, had been decapitated; this is clear not only from the fact that the first two vertebrae were still in place beneath the skull, but from damage to the vertebrae consistent with a butchery pattern found in animals, in which the neck is weakened by cutting to the point where it can be forcibly snapped to crack through the bone and remove the head.

Since these people seem to have died by close-range violence -- strangled, bashed on the head, their heads twisted until their necks snapped -- these discoveries have made the news under the heading "Celtic Human Sacrifice." And they may be just that. But the things done to the bodies after death are equally bizarre, and equally characteristic of northern Europe in the Iron Age.
Posted by John at 2:50 PM