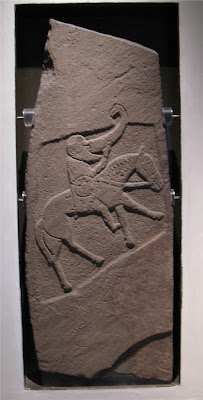 While I was by myself this morning I wandered into the National Museum of Scotland, where I spent my entire two hours in the rooms devoted to ancient times. The place is full of wonders: this stone, from the Pictish country in the northeast, seems to show a bald, drunken old man, "almost a caricature," as the sign says. Might be from the 8th century CE, but nobody really knows, because there is nothing else like it. 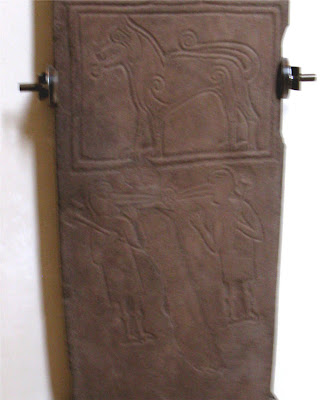 Why on earth does the stone above show two bird-headed men pecking at a human head? The sign only informed me that this was a "pagan motif," but it certainly isn't one I've ever seen before. 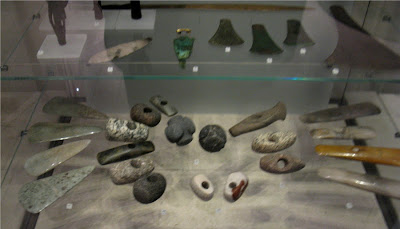 Nice array of fancy stone tools, including mace heads from the Bronze Age. 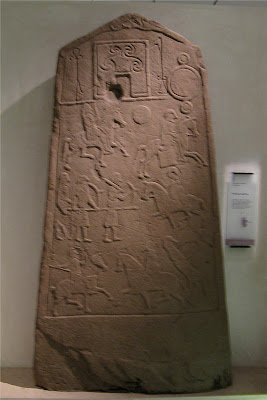 This wonderful stone, from around 700 CE, shows a battle scene. 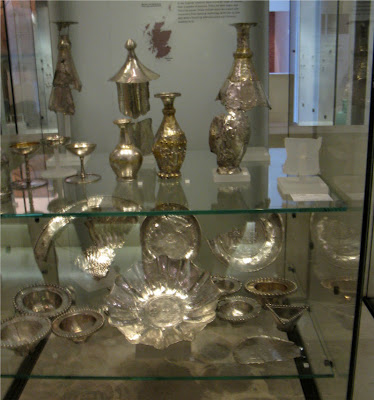 Part of the Traprain Treasure, a huge hoard of Roman silver dating to around 410 CE. It was found in a part of Scotland with strong Roman connections, apparently a sort of client state. The best guess is that this treasure was delivered to the chief as a bribe to help defend the empire's frontier when it was weakened by the withdrawal of Rome's legions. Funny that 1) it was just buried in the ground, and 2) the Picts immediately started attacking the weakened empire. 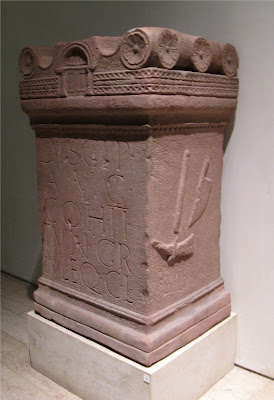 I loved this Roman altar stone, bearing the symbols of the masons who built Rome's walls, roads and temples. 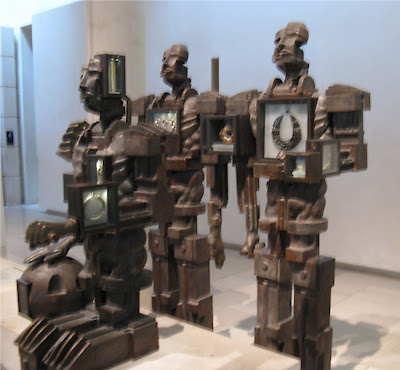 Though I enjoyed the museum very much, there is much weirdness about the place. Some of the artifacts are in more or less chronological displays, but others are in thematic galleries devoted to things like stone technology or offerings to the gods. Some of the carved stones are in a large exhibit titled "Them and Us." I thought, that pretty much covers everybody, doesn't it? And then there are these figures, used to display their most famous Bronze and Iron Age jewelry. Robot men from the future have come to steal your ancient treasures!

Who thought this was a good idea?
Posted by John at 4:50 PM