We're Not Going to Run Out of Fresh Water 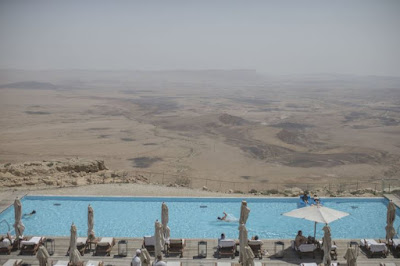 Israel now gets 55% of its fresh water from desalination, and it has gone in a decade from a water crisis to a water surplus that it is marketing to neighbors:


In 2008, Israel teetered on the edge of catastrophe. A decade-long drought had scorched the Fertile Crescent, and Israel’s largest source of freshwater, the Sea of Galilee, had dropped to within inches of the “black line” at which irreversible salt infiltration would flood the lake and ruin it forever. Water restrictions were imposed, and many farmers lost a year’s crops. Their counterparts in Syria fared much worse. As the drought intensified and the water table plunged, Syria’s farmers chased it, drilling wells 100, 200, then 500 meters (300, 700, then 1,600 feet) down in a literal race to the bottom. Eventually, the wells ran dry and Syria’s farmland collapsed in an epic dust storm. More than a million farmers joined massive shantytowns on the outskirts of Aleppo, Homs, Damascus and other cities in a futile attempt to find work and purpose.

Some people think this agricultural crisis was the real root of the Syrian uprising.

But the crisis has eased in Israel. Part of the solution was in requiring people to be more efficient about using water, especially farmers:

California, are you listening?

But even with all of this rationing and re-use, Israel still did not have enough water for its needs. So Israeli engineers attacked desalination on a broad front, using dozens of innovations and sheer scale to make reverse osmosis desalination far more affordable:


Inside Sorek, 50,000 membranes enclosed in vertical white cylinders, each 4 feet high and 16 inches wide, are whirring like jet engines. The whole thing feels like a throbbing spaceship about to blast off. The cylinders contain sheets of plastic membranes wrapped around a central pipe, and the membranes are stippled with pores less than a hundredth the diameter of a human hair. Water shoots into the cylinders at a pressure of 70 atmospheres and is pushed through the membranes, while the remaining brine is returned to the sea.

Desalination used to be an expensive energy hog, but the kind of advanced technologies being employed at Sorek have been a game changer. Water produced by desalination costs just a third of what it did in the 1990s. Sorek can produce a thousand liters of drinking water for 58 cents. Israeli households pay about US$30 a month for their water — similar to households in most U.S. cities, and far less than Las Vegas (US$47) or Los Angeles (US$58).

The combination of improved desalination and cheap solar power (deserts have lots of sunshine) means that any coastal area can solve its water problems whenever the people decide to.
Posted by John at 7:37 AM