Maya Funerary Urns at the MFA Yesterday I took a wonderful trip to the Museum of Fine Arts in Boston with one of my old college friends. We spent most of our time in the ancient and classical galleries, gazing at Assyrian statues and Greek vases. I may post something on that later. But the thing that most blew me away was this display of Maya funerary urns at the entrance to their gallery of Native American art. 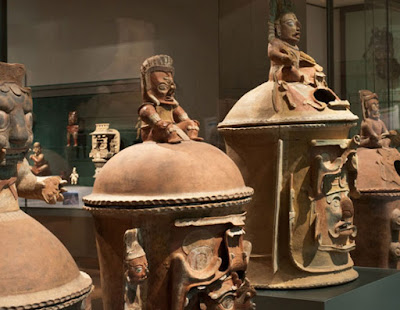 These are about four feet (1.2 m) tall, and the effect of these five bizarre visions side-by-side was overwhelmingly strange. 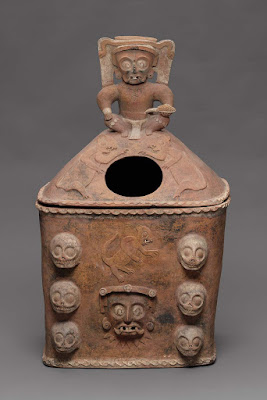 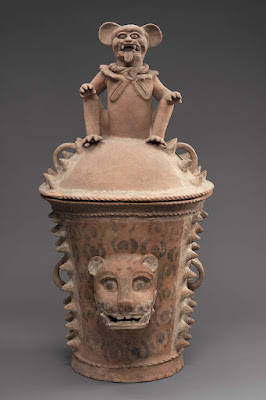 A sample. They actually have about ten of these, and you can see all of them at their web site. All of them come from the mountainous K'iche district of southern Guatemala; they would have been placed in caves or tombs. These probably come from caves. They date to the peak of Maya civilization, c. 650 to 800 CE. 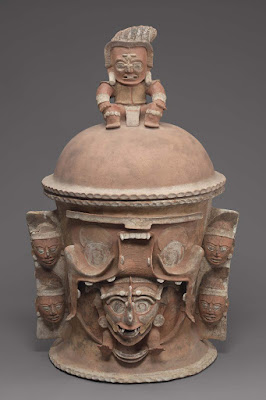 Another interesting thing about these objects is that they were all donated by the same man, who had them in his private collection for years; imagine what his house was like. Perhaps he gave them away when he could no longer sleep without nightmares. We were struck by this motif of the animal head emerging from another monster's mouth. 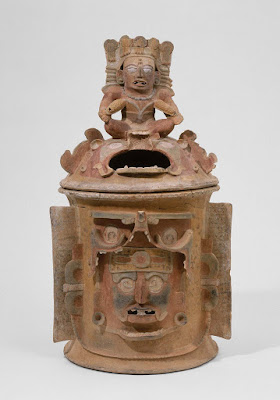 This is seriously freaky stuff, and I think intentionally so. Maya religion used shocking or horrific ceremonies and images to produce extremely strong emotions. Nothing sweet or soothing about their images of death.
Posted by John at 9:36 AM

"This is seriously freaky stuff, and I think intentionally so. Maya religion used shocking or horrific ceremonies and images to produce extremely strong emotions. Nothing sweet or soothing about their images of death."

I don't have the reaction you seem to. The iconography here is strange and unfamiliar to me, but not grotesque or troubling. Compare to La Dia De Los Muertos - all that skeletal iconography might seem macabre to some, but not to Mexicans, for whom it is simply normal and accepted.

Yes, a stylized sugar spun skull isn't on the same level of severity as depictions of blood sacrifice and wild beasts actively consuming each other. But in my mind what counts isn't the content itself, but the familiarity and acceptance of such things within the host culture. If bloodshed and violence is not only ordinary but even celebrated in your society, you're going to view depictions of such things in a very different way.

Consider that to you and I, things like medical surgery and the study of anatomy seem ordinary and mundane - but a thousand years ago in both Christian and Muslim lands, cutting open a human corpse, living or dead, and poking around inside was witchcraft, necromancy, and an abomination punishable by swift and merciless death. Consider how in most societies cannibalism is utterly abbhorant, but nevertheless there are extant cultures which ritualize it as a form of funerary rite and ancestor worship. What one group sees as horrific, another may treat as ordinary or even desireable.