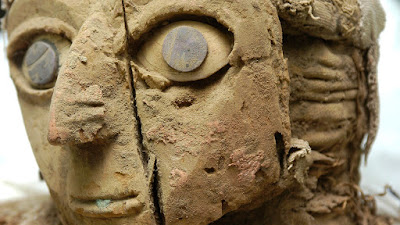 Tiffiny Tung, a bioarchaeologist at Vanderbilt University in Nashville, has studied skeletons from two large cemeteries in Peru. They date to the declining years of the Wari empire and the period of anarchy that came after it fell and before the rise of the Inca. She finds frightening levels of violence:


Even in their heyday, the Wari were no strangers to violence. In earlier work, Tung had studied their practice of decapitating captives from conquered communities to create mummified trophy heads. But as long as the empire was strong, the violence was ritualized and limited. From previous excavations, Tung found that in imperial Huari, only 20% of adult skulls had healed skull fractures, which are evidence of nonlethal head injuries, and barely any had suffered fatal wounds. During and immediately after the collapse, however, nearly 60% of adults of both sexes and 38% of children showed signs of nonlethal head injury.

Centuries later, life in Huari had gone from bad to worse. Rates of nonlethal head trauma hadn't changed much, but fatal injuries had skyrocketed. At the time of the collapse, only 10% of adults had died of a head injury, but now the rate of fatal head injury had risen to 40% among adults and 44% in children. "Violence becomes much more deadly," Tung said in her talk. "These violent deaths aren't from random outbreaks of community brawls. This is much more systematic, lethal violence, but it's unclear at this time if it's from civil war or warfare with those perceived as outsiders."

There was also evidence of malnutrition in the post-collapse period, and for a declining level of ritualistic concern for the dead.

I suppose the general take-away was that while life under a militant empire like the Wari was rough, life without them was even worse.
Posted by John at 7:52 AM