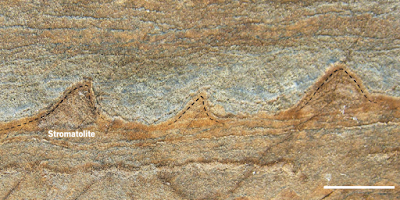 The oldest fossils on earth are stromatolites, the imprints of humpy structures built up by the bacteria we call blue-green algae. Until this week the oldest stromatolites were dated to around 3.45 billion years ago. Now there is a new claim that the structures in the image above are primitive stromatolites 250 million years older, around 3.7 billion years old. If true (and even the discoverers say it is iffy) that doesn't leave a whole lot of time for life to appear on earth. The episode of intense asteroid assault called the Late Heavy Bombardment ended around 3.8 billion years ago, and since the oldest continental rocks date to after that time, the bombardment seems to have melted much of the crust. (As on the moon, creating its lava "seas.") On the generally accepted theory that life had to evolve after the bombardment ended, it must have done so in 100 million years. Of course 100 million years is an unimaginably long time, but then life is unimaginably weird and complex, and 100 million years doesn't seem like all that long for it to evolve.

On the other hand some people think there is evidence of life (skewed carbon isotope ratios) in zircon crystals from before the bombardment, and scenarios have been dreamed up allowing life to survive in deep undersea vents or some such place. But if either theory is right there has been life on Earth for most of its history, which I find quite astonishing.
Posted by John at 9:37 PM