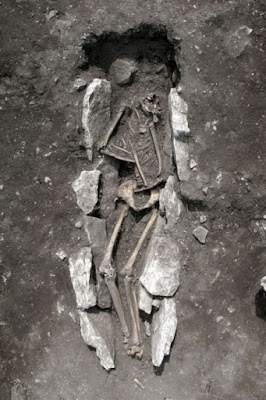 
Archaeologists in Greece have made a sinister discovery on a southern mountain top dedicated to the ancient god Zeus, which might corroborate one of the darkest Greek legends.

The Culture Ministry said Wednesday that an excavation of a mound on Mount Lykaion, made of the ashes of animals sacrificed for more than a thousand years to the chief of the Greek gods, also uncovered a 3,000-year-old skeleton of a teenager.

The find in the southern Peloponnese region dates to the 11th century B.C.

That was the end of the Mycenaean era, whose heroes were immortalized in Greek myth and Homer's epics, and many of whose palaces still stand.

Ancient writers linked Mount Lykaion with human sacrifice, a practice which has very rarely been confirmed by archaeologists in the Greek world.

But actually the boy's skeleton was found in a proper grave, so calling him a victim of human sacrifice is a wild surmisal, even if the grave was at the bottom of the pile of sacrificial ashes.

But the legend is awesome; according to our accounts, a human victim was killed and a meal prepared with one human serving and the rest animal; whoever got the human meat and tasted it would become a wolf for nine years.

Other sources say there were no shadows within the sacred precinct on the mountain, and that any non-priest who entered would be dead within the year.
Posted by John at 9:08 PM

How did the archaeologists determine that the person was sacrificed?

To clarify--what features of the skeleton or burial were sacrificial? Was it simply the location?

All that has been published so far is the location, at the bottom of the pile of bones and ashes that make up the sacrificial altar. There may be more but if so they are withholding it until their article comes out.