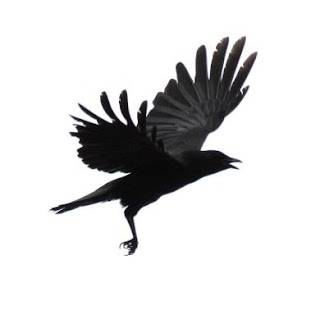 I drove down to Washington today because I had an afternoon meeting in the suburbs. When I was just two blocks from my office, sitting at a light, a crow flew across the street about ten feet in front of me. When it was right in front of my car it dropped one of its large, primary wing feathers. The feather spiraled lazily down the street, spinning. On one side it looked all black, but on the other I could clearly see the white central rib, black alternating with black and white as it turned.

I thought, if I were a Roman I would turn around and go back to bed.
Posted by John at 8:07 PM

"I thought, if I were a Roman I would turn around and go back to bed."

And if you were a Tibetan, you'd cheer your good fortune and excitedly wonder what blessing was in store for you in the future.

So far as I've been able to piece together, whether you perceive crows, ravens, and other dark colored scavenging birds positively or negatively depends on how much warfare your culture historically has been involved in.

If you live in a society with frequent bloodshed, you're going to see a lot more of corvids scavenging on the fallen, and you're more likely to associate them with death, suffering, and wickedness - which strikes me as an unfair psychological projection of our own human failings onto others.

Meanwhile, if you live in a society where battle is either less frequent, or more ritualized and thus less deadly, then crows are liable to be appreciated for their cleverness and curiosity, and venerated as cunning tricksters or even as possessors of great wisdom.

Personally, I prefer the latter view.

If you were a Roman the meaning of the bird would depend on whether it was going from right to left or left to right. On this important matter you have failed to inform us.

But I was facing north, so the bird appeared from the west.