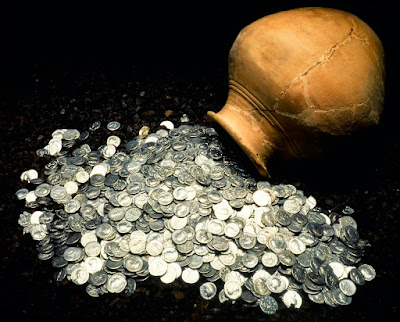 A hoard of 1,925 Roman coins found by workmen in 1933 near Falkirk in Scotland. Now in the National Museum of Scotland. The hoard contains coins from the period 38 BCE to 230 CE, most of them rather evenly distributed across the whole 69 to 230 period. Since coins tended not to circulate within the empire for that long, the general thinking is that this hoard was accumulated in Scotland.

Presumably by some strange family of wealthy Scottish misers who kept all their coins for 150 years.
Posted by John at 7:23 PM