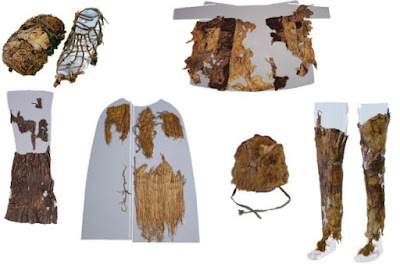 Ötzi the Ice Man died on an Alpine glacier 5,300 years ago, likely fleeing from whoever shot an arrow into him. Study of his frozen body has produced lots of great information about the European late Neolithic. One thing that has resisted analysis is the source of the leather that made up much of his clothing. Scraping of the hides had destroyed the grain that can identify species, and treatment in acid had destroyed most of the DNA. Now some scientists think that by isolating and then "amplifying" the mitochondrial DNA from the clothes (better protected than nuclear DNA, and simpler), they have solved the mystery:


His leggings were goat, his loincloth was sheep and his coat was made of the skins of both species. “The materials derived from both sheep and goats came from multiple individuals,” the researchers wrote. “There were at least four sheep and two goats used in the manufacture.”

Ötzi’s shoelaces, meantime, came from cattle—similar to the leather laces in modern-day hiking boots—and the quiver was roe deer. The hat was the garment the Ice Man likely had to work hardest for: it came from a brown bear, suggesting Ötzi and his friends weren’t afraid to tangle with large carnivores if they had to.

Wonderful, with the usual caveat that this is cutting-edge science and therefore subject to revision. 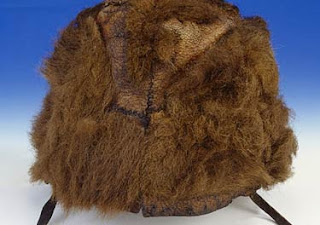 I would also note that both the hat (above) and parts of the shoes had already been identified as bear hide, so that's not a new discovery. 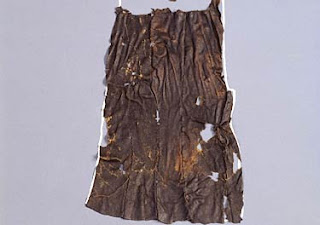 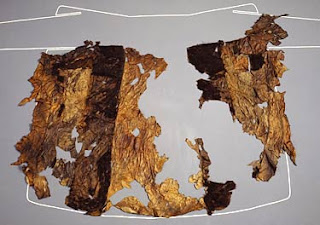 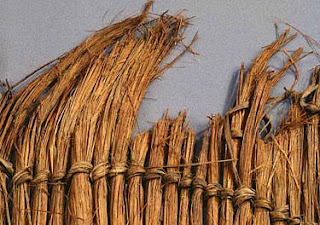 Incidentally the nature of the woven grass thing is disputed. The original investigators thought it was a cape, but lately many have argued that it was actually a backpack, on the grounds that a grass cape just makes no sense. 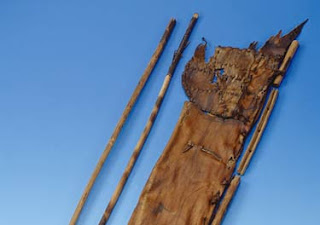 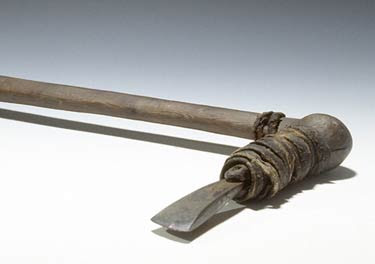 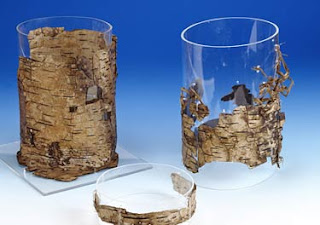 Birchbark containers, one of which was charred on the inside and was probably used to carry around embers for rekindling fires. When you imagine stone age people wandering, you have to remember that they carried all their possessions around with them, so were likely weighed down with packs, bags, etc. 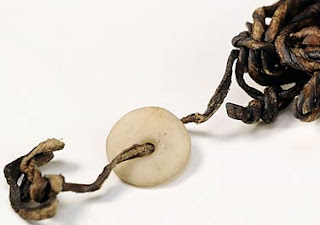 And the marble amulet.
Posted by John at 8:11 AM

"Incidentally the nature of the woven grass thing is disputed. The original investigators thought it was a cape, but lately many have argued that it was actually a backpack, on the grounds that a grass cape just makes no sense."

There are numerous Asian cultures that have long employed straw capes for protection from the elements and for camouflage. They actually make rather a great deal of sense, particularly anywhere that's wet, cold, windy, and even partially vegetated - like Alpine forests, for example.

So doing some independent searching around for more information, I'm led to believe I misunderstood what you were trying to say due to somewhat awkward phrasing.

From what I've read, the nature of the dispute isn't that grass capes as a concept wouldn't make sense, but rather that there is other evidence suggesting that this particular artifact is perhaps not a grass cape.

Specifically, I found opinions that from examining the construction and extrapolating the likely full shape, the object wouldn't fit over the man's shoulders properly. There's also the suggestion that it would make accessing his quiver difficult, or that wearing it with other items found would have created wear and damage which isn't present, and other largely geometric concerns.

Alternate explanations for what the object might be include a basket-like container which made up a second part of what they believe to have been a backpack, attaching somehow to the leather piece they've already found (making that a sort of backing material holding it together); or conversely, it might be a straw hat which would serve much the same purpose as a cape or cloak in shedding rain or snow.