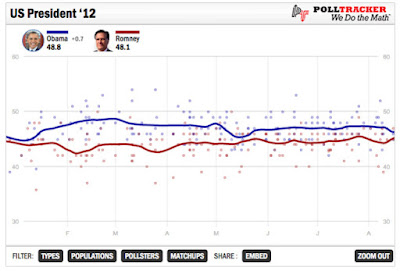 Love this side-by-side comparison of polling in 2012 and this year, via Josh Marshall. The Obama vs. Romney election was in some senses the perfect presidential contest: both were impressive, experienced, scandal-free candidates, highly regarded in their own parties. Both were well known to voters. Both are also very predictable men, and during the campaign neither did anything remotely surprising. The result was an almost unchanging poll line, showing Obama with a slight advantage pretty much through the whole year. (Romney surged to a brief tie after the first debate.) I have read that Obama's internal polling showed an absolutely unchanging 2 point lead for him through the entire campaign. That seems to be where America is right now, given fairly generic liberal and conservative candidates. 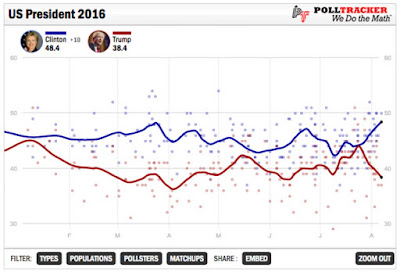 And now 2016. This year we have two candidates who are both despised by large groups within their own parties, with long records of scandal, one of whom does crazy stuff on a regular basis. The result is numbers that veer all over the place, giving us the possibility that Clinton might win in a blowout, or that Trump might defy the odds and win a narrow victory, or anything in between. I don't think we'll know for sure until after the last debate in October.

"Hey, at least it's interesting."

Well, so was the fall of Rome.

For my own sake, I'm not big on having a nation's development be interesting - there are plenty of other things for me to take interest in, and I'd much rather have politics be boring and predictable if it means they'll be positive and result in a steady march towards progress and the betterment of all.