Americans Lose Faith in Each Other 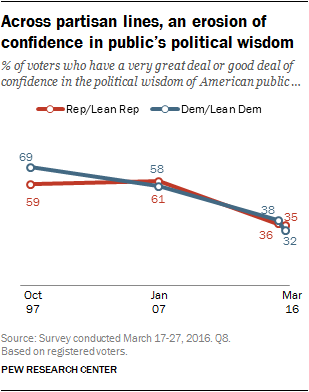 This might be the year's most depressing poll. It shows that since 1997 the percentage of Americans who have confidence in the political wisdom of American voters has fallen from more than 60 percent to less than 35 percent. You can see that normally voters of the party in power have a bit more confidence, but right now the reverse is true.

This must have something to do with fear of Trump and his followers, but I suspect there is more; first, the generally bad mood of the country, and second, the sense among partisans of both the left and the right that they are losing.
Posted by John at 6:36 PM

That graph only has three data points, though. It jumps across nine years between Jan 07 and Mar 16, and what looks like a steady decline might be anything but once you get data for the intervening time.

This most recent election has been the nastiest in memory, and I think a lot of the faith lost has only occured in response to that nastiness, and thus the drop was only relatively recent.

Democrats are of course overwhelmingly disappointed that so many people are supporting Trump, but they're also disappointed in Bernie supporters who seemed to be suckered by vague and absurd promises of "revolution" - and likewise, Sanders supporters are disappointed that Democrats at large rejected Bernie. Both camps view the other as lacking in political wisdom.

Republicans are even more torn. Many of them of course don't like Hilary, but large numbers also don't like Trump either. For the different factions on the GOP, defeat of their preferred Republican candidates of choice has shaken their faith in their ideological fellows. And while party loyalty might still sway some people to support Trump despite not really wanting to, and while others might cross the party line and support Hilary despite not really wanting to, the fact that they feel compelled to either action speaks to each group's disappointment with the rest of the GOP.