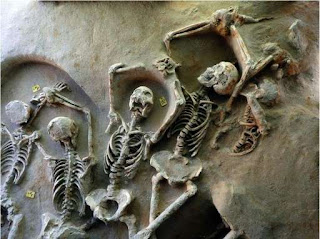 
Regional archaeological services director Stella Chryssoulaki of the Greek Ministry of Culture announced that archaeologists discovered two mass graves containing the lined-up skeletons of 80 men in an ancient cemetery at a construction site near Athens. The men are thought to have been young and healthy, due to the condition of their teeth. The hands of 36 of the men had been bound with iron. Some of them had been buried on their backs, while others were on their stomachs. Two vases found with the skeletons date to the mid seventh century B.C.

The archaeologists note that while these men seem to have been executed, they were buried with some degree of respect, in the Falyron Delta cemetery where other citizens were interred. So they were probably not ordinary criminals. 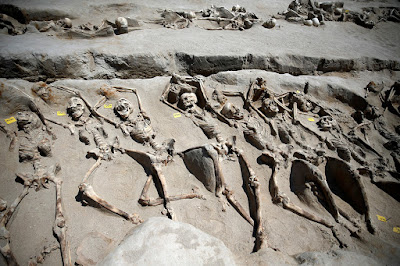 The seventh century was a time of great turmoil in Athens, as throughout Greece, so the reigning interpretation is these men were killed after losing out in civil strife. Perhaps they were supporters of the Olympic champion and would-be tyrant Cylon, who staged a coup attempt in 632. Our sources tell us that while Cylon escaped, many of his supporters were captured and killed.

I hope this interpretation works out, because I love it when archaeology and history align so neatly. It so rarely happens.
Posted by John at 8:59 AM