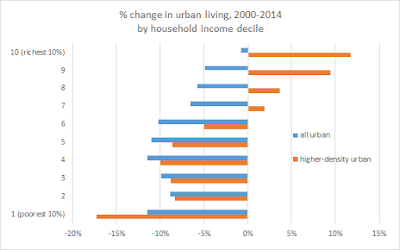 Core neighborhoods in some American cities are booming, even though big problems remain with big city school systems, police forces, and so on. So who is moving to cities? 538 has a nice article on this, with graphs. You can see from the graph above that while wealthier people are moving to inner city neighborhoods in places like Manhattan, Brooklyn, Washington, and San Francisco, poor people are moving out. In fact the poorest people are fleeing inner city neighborhoods in record numbers. This backs up an insight I heard twenty years ago from a relative who works in real estate. Far-flung outer suburbs, he said, were destined to become the slums of the future as people get tired of commuting and the ones who can afford it move back to older urban neighborhoods and inner suburbs. The idea of suburban counties as white, middle class bastions is dead. The suburban counties around here include large concentrations of poor people, immigrants, and blacks. Fights have broken out over school district lines in several Maryland counties as middle class people seek to protect their children's schools, and the value of their houses, from influxes of poor, minority students. 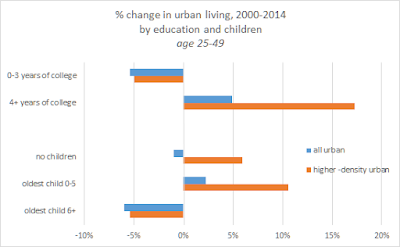 But inner city schools remain a big problem, at least in the eyes of middle class parents. You can see this in the bottom half of the graph above, which shows that people with no children or only toddlers are moving to the inner cities, but people with school age children are moving out. One mother I know, a devotee of hip urban living, saw my neighborhood and said, "If I lived out here I would have to put my head in the oven." But after a few years of fighting with the Baltimore City schools, she now lives right down the road.
Posted by John at 7:48 AM

About a century and a half ago, roughly 2% of the human population lived in cities. In the present day, about 53% does.

Historically, the boom in city populations was fueled by a massive influx of the poor from rural areas seeking a better life. They came for the jobs provided by the new city-based industrialization of the age, and also to gain access to new technologies and services unavailable elsewhere, such as electricity, sanitary sewers and indoor plumbing, higher education, and more.

But in much of the western world, things have since changed. We no longer produce as many factory-made and durable goods, as the markets have shifted to regions with cheaper labor and fewer regulations. We've instead shifted our markets more toward service industry and digital technology - less tangible and more specialized goods that don't require large factories and highly concentrated populations of workers to produce. What physical manufacturing we still engage in has moved to the outskirts of cities, or even further afield - after all, not many people want to live near an industrial chemical facility, a medical research laboratory, a petroleum refinery, or similar.

The reasons for the poor to remain in cities are slowly dwindling. The wealthy will always create demand for service industries, but that market alone can't provide jobs for all the millions of impoverished urbanites who need them. So with manufacturing and other mass labor enterprises leaving the cities, the poor likely will start following suit. The process will be sped along by diminishing access to vital services - as cities continue to spend ever less on things like education and public transit, life will get progressively harder for the poor. Eventually, they'll pick up and leave to try their luck elsewhere.

Unless something changes to give the poor incentives to remain in cities, I strongly suspect we're going to start seeing a mass exodus back to rural and semi-urban areas.