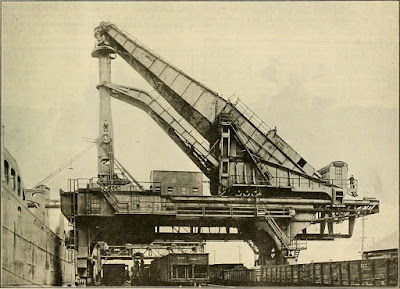 Today on the train a man about 65 in a well-made dark suit sat down next to me, apologizing in a very genteel way for the intrusion. He was obviously on his way to the airport, and he seemed to want to talk, so I asked him where he was going. (Part of my ongoing program to get to know my fellow humans better and become less of an intellectual recluse.) Home to Cleveland, it turned out, from a conference in Washington. He is, he explained, a community banker, which in his mind is something quite different from being an ordinary banker; his bank is very focused on lending to people in the communities around their branches. Plus, they have no stockholders; the bank is effectively owned by the depositors. We talked the whole way to the airport, nearly half an hour. He ended up talking about growing up in Cleveland, and how much he enjoyed going down to the docks to watch the unloading of iron ore from the great ore boats, the loading of coal, the building of ships from the keel up. 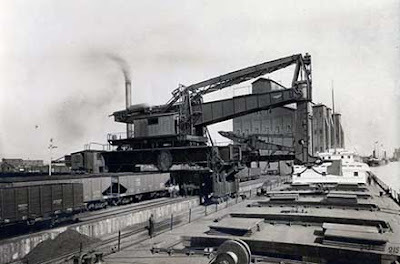 He told me about the Hulett ore unloaders (above and top), great machines built in the early 1900s to extract ore from the holds of the ships coming down from the Iron Range.

He went on for a couple of minutes about the machines that lifted and tipped whole train cars loaded with coal (above), "all done with counterweights." 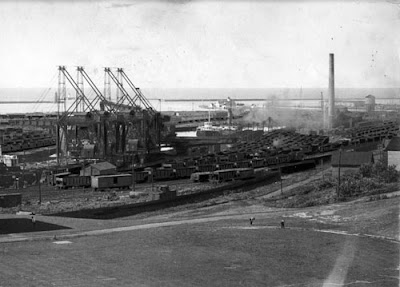 This technology was dirty and it used up men like spare parts, but it meant something to people. It was not a mystery like the innards of a smart phone, but something that could be seen, heard, and understood. These men did not manipulate spreadsheets or attend meetings; they made things, steel and automobiles and trains and washing machines.

My new acquaintance summed it up: "I don't think people realized how much was being lost."
Posted by John at 6:53 AM

We're a highly sight and touch oriented species by nature, so I suppose it's somewhat an evolutionary bias that people tend to put more faith into things that are more visible or tangible.

This tendency to favor the corporeal is going to be a challenge through the Digital Age. People already exhibit it with computers, employing a "Point and Click" user mentality in which they know how to manipulate their computer systems to achieve a specific goal within normal conditions, but they don't possess a knowledge of how that system actually operates or the flexibility to handle problems outside their regular usage needs.

Of course, this is not a new tendency - its stretches back in history and applies to far less complicated technology. How many people really understand the way their cars operate, or even something relatively simplistic like a toaster or a mechanical wristwatch? How many people even properly comprehend the nature of a fire in their fireplace? In many cases, a mere practical knowledge is deemed sufficient in lieu of a true theoretical understanding.

In a way, this is one of the major pitfalls of our modern culture. There's too little emphasis placed on understanding the underlying concepts of how things work, and far too much emphasis placed on push-button manipulation of pre-existing objects and systems. And yet, our entire modern society relies on technology and systems that the average person just has no meaningful understanding of. That's a worrying thought.

But it's certainly not impossible to teach people. A century ago, the men working these nostalgically remembered industrial machines had to be taught the natures of their operation - not just the means to manipulate them, but also the foundational concepts they relied on, like the use of counterweights. They had to achieve a mastery not only of the physical controls in their hands, but of the physics of leverage that made the whole thing possible.

And at the same time, you also get the benefit of being able to apply some of that underlying knowledge to other systems - your understanding of electicity also applies to other electric devices, meaning you if you then try to figure out how a toaster functions, you've already got one of the fundamentals of its operation mastered.

This is why I'm relieved and inspired by movements like the Maker culture. They teach people that we're all much more capable than we give ourselves credit for, and that with just a little bit of work learning underlying fundamental concepts, we can turn around and apply them to all sorts of productive ends. It's the Bob Ross "Joy of Painting" technique - take something that seems inscrutable, ineffable, and inaccessible to the average person, and empower them by helping them realize it's really not so arcane and esoteric as they assume, and encourage them to try it for themselves.