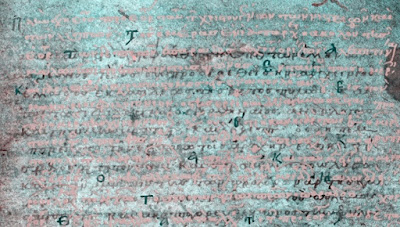 The Roman Empire went through a major crisis in the third century CE, when much of the empire was overrun by invaders. In response to this many cities hundreds of miles from the frontier built new walls, a real sign that the Pax Romana was fraying. These invasions were eventually turned back, but not until great damage had been done. This is a poorly-documented part of the empire's history; there are no surviving accounts of those events by major contemporary historians, nor any very detailed treatments by later writers. Which makes the discovery of a contemporary account in a palimpsest – a manuscript that had been erased and written over – a significant event in ancient studies. The palimpsest in question is in Vienna, and a piece of it is shown above. 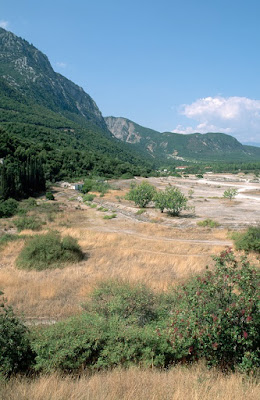 The text in question is thought to be part of a work called the Scythica by the Greek writer Dexippus. It describes in invasion of Greece by an army of Goths, including a battle in the famous pass of Thermopylae (above). An English translation of the whole passage has been published in the Journal of Roman Studies, and I would love to see it if any of my friends has access. LiveScience offers this summary:


At the start of the fragment, "battle columns" of Goths are attacking the Greek city of Thessalonica.

"Making an assault upon the city of the Thessalonians, they tried to capture it as a close-packed band," Dexippus wrote of the attack, as translated by Mallan and Davenport. "Those on the walls defended themselves valiantly, warding off the battle columns with the assistance of many hands."

Unable to capture Thessalonica, the Goth force turned south toward Athens, "envisioning the gold and silver votive offerings and the many processional goods in the Greek sanctuaries, for they learned that the region was exceedingly wealthy in this respect," Dexippus wrote.

A Greek force assembled at the narrow pass of Thermopylae in an attempt to stop the Gothic advance. "Some [of the Greeks] carried small spears, others axes, others wooden pikes overlaid with bronze and with iron tips, or whatever each man could arm himself with," Dexippus wrote. "When they came together, they completely fortified the perimeter wall and devoted themselves to its protection with haste."

Dexippus then offers a speech that he assigns to a Greek commander named Marianus, who tried to rally his men by reminding them of the battles their ancestors had fought at Thermopylae in the past, including the famous fifth-century B.C. battle against the Persians (The 300, etc.).


"O Greeks, the occasion of our preservation for which you are assembled and the land in which you have been deployed are both truly fitting to evoke the memory of virtuous deeds," Marianus' speech to his troops reads, as translated from the fragment. "For your ancestors, fighting in this place in former times, did not let Greece down and deprive it of its free state.

"In previous attacks, you seemed terrifying to the enemies," said Marianus. "On account of these things, future events do not appear to me not without hope …"

The fragment ends before the completion of Marianus' speech, and the outcome of the battle is uncertain, researchers said.

Well, that's disappointing. We are left in suspense, until some other fragment appears a few decades from now. Or perhaps forever. 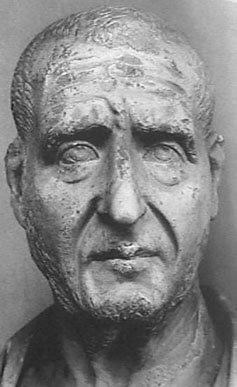 Another fragment of Dexippus resurrected from the same manuscript describes an earlier battle against Goths fought by the Emperor Decius, who reigned from 249 to 251. In the speech Dexippus wrote for Decius, the emperor says,


Men, I wish the military force and all the provincial territory were in a good condition and not humiliated by the enemy. But since the incidents of human life bring manifold sufferings … it is the duty of prudent men to accept what happens and not to lose their spirit, nor become weak.

Doesn't he look like a man who would make world-weary pronouncements like that? I plan to drag this out whenever any of my children starts whining.
Posted by John at 1:02 PM