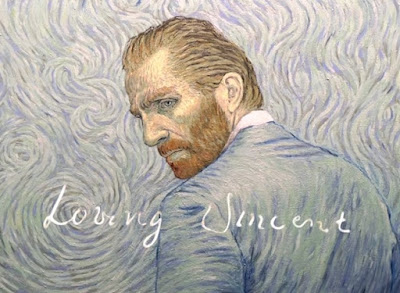 Trailer for an animated movie about Van Gogh.
Posted by John at 7:27 PM

This is bizarre for me, because this very strongly has the look and feel of the old FMV (full motion video) cutscenes from certain kinds of video games about twenty years ago or so.

Considering the art technique, I can only assume this is a sort of digital rotoscoping. I'm not entirely certain it really works here, though. It very clearly is trying to match Van Gogh's impressionist aesthetic, but it doesn't quite get all the way there, looking too automated and mechanical - like applying a Photoshop filter to a photograph instead of actually painting over it by hand.

For me, this creates a pseudo "Uncanny Valley" effect, where the details are close enough to be recognizeable as what they're intending, but "wrong" enough to make me recoil from it as my brain rejects the minute errors I can't really consciously point out.

Particularly jarring is the disconnect between the "filtered" flesh and blood actors and the actually painted art onto which they've been superimposed. I hate to say it, but I really dislike the end result - it feels cheap and lacking effort, which is exactly the wrong sort of look for a film trying to glorify the skill and care Van Gogh put into his paintings.

I can't help but make unfavorable comparisons to other similarly unusually animated films of a serious bent and historical setting, such as Waltz With Bashir and Persepolis. You just can't fake good animation - half the point of the medium is admiring the effort and skill that goes into creating such works. Even traditional rotoscoping by hand displays the technique of the creator - heck, so too does full 3D CGI done properly.

But this? No, the illusion is too poor, the seams too visible, the falsehoods too obvious to the eye and not compensated for in other ways such as a sense of self awareness. Maybe the film's story itself will make up for it - I certainly hope so.