The Battle of the Tollense River, 1250 BCE 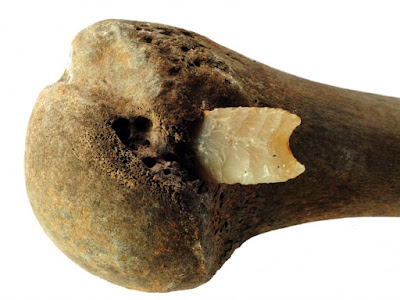 In 1996, an amateur archaeologist found a human arm bone sticking out of the bank of the Tollense River in northern Germany, not far from from the Baltic Sea. That would have been interesting enough, but this arm bone had a flint arrowhead deeply embedded near the upper end. 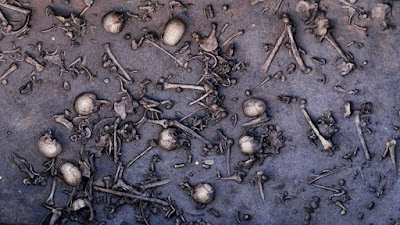 Further excavations revealed a great mass of bones, at least 130 people, and five horses. The excavators think this is less than 10 percent of the deposit, so this might be a whole lot of dead people. The bones are mostly young men, and many died violently. The excavators have claimed that this is the remains of a single event, a great battle fought where a causeway crossed the marshy river. As many as 4000 men may have participated. 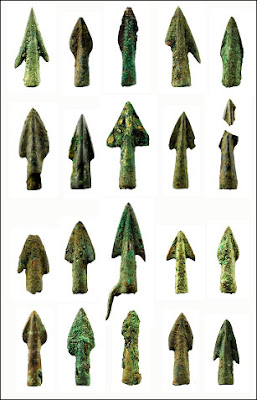 The bones all date to around 1250 BCE. That is well before there were towns or even substantial villages around the Baltic Sea, so to think that a thousand people might have died in a single battle is pretty mind-blowing. Elemental analysis of the bones shows that these men were drawn from a wide area; one of the excavators compared it to the siege of Troy, from which war bands gathered from all over Greece and western Asia Minor. They bore a range of weapons. Some had simple wooden clubs, others stone-headed maces, bronze-tipped spears, or bronze axes. The elite bore bronze swords. Some of their arrows were tipped with stone, others with bronze. These were motley armies, in which farm boys fought beside princes. It is an amazing vision. 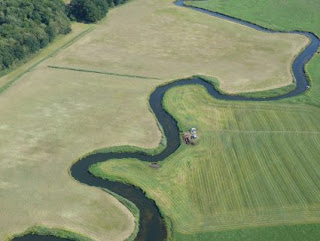 At this point, though, the Battle of the Tollense is far from certain. I have written here before about the sacred ponds and bogs where Iron Age Germans sacrificed war captives and offered their war booty, and nothing I have seen yet proves that these men fell here on a single day, rather than being brought here over a period of decades. Some of the dead seem to have washed some distance down the river before fetching up on sand bars, so they may actually have gone into the river somewhere upstrem. Plus, estimating the total number of bodies or anything else in an archaeological deposit is a very iffy business; I have personally said on one day that I was on the edge of a thick, dense midden that stretched across a wide area and then found the far side after just 10 cm more digging.

I have also read contradictory things about the identity of the skeletons; according to some reports the dead include women, old men, and children. There is no reason why an army on the march might not include some women, children, and old men, but this complicates the picture of what happened. Was this an ambush of a marching column, attacked when it was strung out across a bridge? Or was this something other than a pitched battle of two armies?

But this is certainly an amazing find, and a grand battle seems to me to be perfectly defensible explanation, and perhaps even the most likely. The more we learn about the distant past, the more eventful it seems.
Posted by John at 8:04 PM