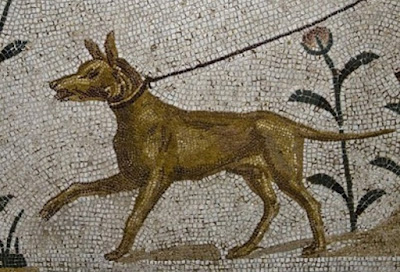 The Roman poet Ovid gives the Greek names of the 36 dogs that belonged to Actaeon, the unlucky hunter of Greek myth who was torn apart by his pack: among them were Tigris, Laelaps (Storm), Aello (Whirlwind), and Arcas (Bear). . . .

Ultimately almost all names are derived from such simple, singular epithets. In our modern world, we've simply forgotten the meanings of many of our names over many centuries and across the barriers of numerous cultures. We often give names based purely on how they sound or feel, or based on references and associations completely separate from the actual meanings of the names.

For example, I very highly doubt almost any of the many millions of men currently named John - which means "Yahweh is gracious" - were given that name with any understanding of its meaning, much less the express intention of the name glorifying the deity in question, as was the original point and purpose of it.

It's really quite fascinating just how much history and meaning is buried all around us in the very fabric of our own language that we simply haven't taken the time to think about or more closely investigate.