The Identity of the Tully Monster 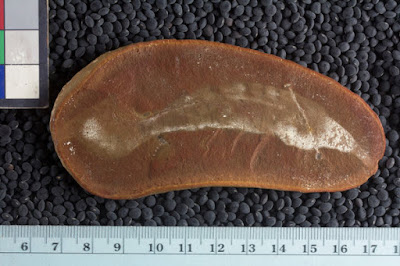 The Tully Monster, Tullimonstrum gregarium, is a strange, 300-million-year fossil found by an amateur in Illinois. These tiny animals have long puzzled paleontologists because they have been hard to place in any known group. Snails? Arthropods? (Scale in cm)

But now a group of paleontologists have, they say, solved the puzzle: the Tully Monster had a notochord or primitive backbone. This makes it part of our own phylum, the chordates.

The news of this discovery just made the Times, because the article was just published yesterday in Nature. But wikipedia already had the new information yesterday, and I am told that it has been up for weeks. I have noticed this before, that wikipedia articles in cutting edge scientific fields are updated much faster than information appears in the journals. This seems to be a backdoor channel that some scientists are using to get around the pre-publication ban on talking about the findings that top journals are still trying to impose.
Posted by John at 7:34 AM

Why does the fossil look almost nothing like the "reconstruction" image? I'm highly confused here.