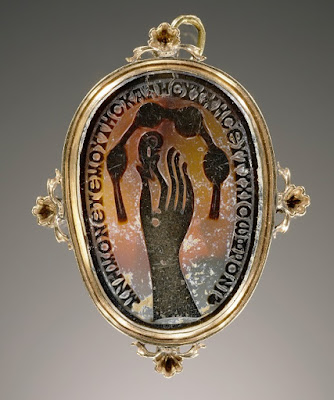 
A hand pinches an earlobe on this ancient cameo. Around the ear is another object, perhaps a knotted scarf or a diadem. The inscription reads: “Remember me, your dear sweetheart, and fare well, Sophronios.”

The ear-tweaking hand is a common motif signifying a request for attention. Gems like this were mementos of love and were given as gifts. This one must have been a heart-felt one.

They say this is Roman, meaning the eastern part of the empire, since the writing is Greek.
Posted by John at 1:51 PM

The unknown object doesn't really look like a diadem or a knotted scarf to me, especially given how much more realistic the hand and scarf would be in comparison.

But what it -does- remind me of is a kombolói, or a string of worry beads. Is the date of this piece known? Because it if turned out to be a later period Byzantine artifact, then I'd find that to be a rather compelling explanation of the mystery symbol.

I found this in the main Getty collection: