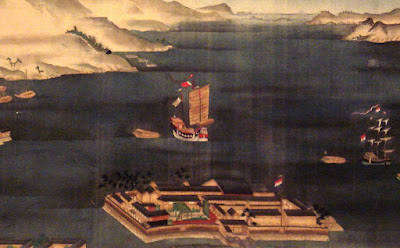 I was talking fiction with a relative at my Richmond family's annual February birthday party (lots of February births) when the subject of David Mitchell's Cloud Atlas came up. We agreed that the structural gimmicks were a showy waste, and whatever value it had came from one or two good stories embedded in the silly architecture. But, he said, you should read The Thousand Autumns of Jacob de Zoet, which is excellent.

I took his advice and I am glad I did. I just finished listening to Mitchell's 2010 novel, and I loved it. In fact I loved it so much that this morning I started listening to it again. It is just my kind of book, with a fascinating historical setting enlivened by hints of the fantastic. The main character, de Zoet, is a clerk in the Dutch East India Company. In 1799 he arrives on Dejima, the tiny Dutch island outpost that was the only point of contact between Japan and the European world. Mitchell fills Dejima with a marvelous array of European and Japanese characters, the Dutchmen struggling to get on with their trading and their lives as Napoleon's conquests overturn the homeland they left behind. 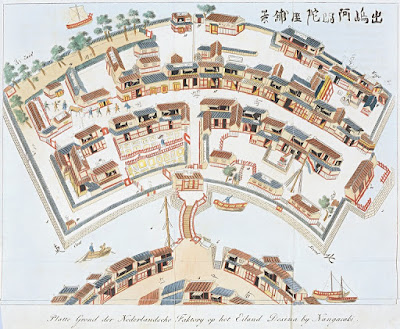 The chief villain is perhaps too villainous, but I found the heroes quite human and just heroic enough. Interesting minor characters abound. The Japanese setting is very well rendered, the corrupt politics of the Dutch East India company even more so. The reading I listened to was no more than adequate, but that was sufficient to convey the excellence of the book. I give this my highest recommendation.
Posted by John at 7:28 AM

Thanks! My next read.