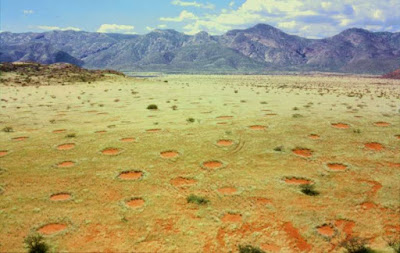 Fairy Circles are what biologists call round bare spots that appear in the dry grasslands of southern Africa at certain seasons of the year. Sometimes the grass around the edges is particularly lush, creating what look like raised rings in the image above. The circles in a given area are all about the same size and they are spaced with remarkable regularity. 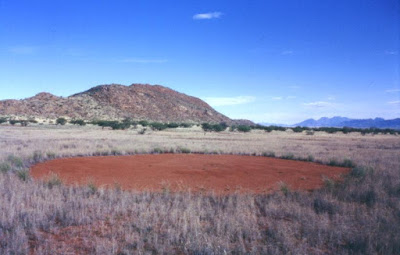 For decades people have been offering explanations that range from termites to ancient funeral pyres. (Some locals hold that they are the footprints of gods.) Three years ago some scientists unveiled a new explanation, competition between plants:


In the harsh desert environment, plants compete for resources below ground, and some don’t survive. When weaker grass dies, its absence facilitates growth of neighboring plants. The vegetation gap expands until it reaches a size that limits competition between grasses.

But if the explanation is something so general as competition among plants, then these circles ought to be found in all dry grasslands, right? 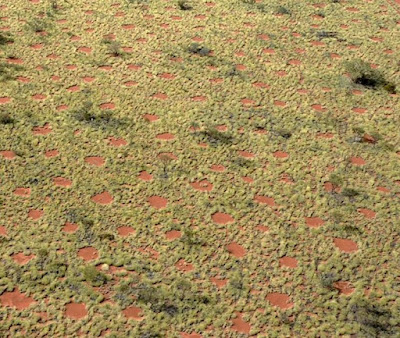 So some other biologists went looking for them in Australia, and lo and behold they found plenty of them (above). As the theory predicts, they are limited to areas with the right amount of rainfall, and they wax and wane according to how much rain falls in a given year. This doesn't quite nail down the explanation, but it is very strong evidence, especially since the insect species that feature in some African explanations don't exist in Australia.
Posted by John at 8:13 PM