A Quick Lesson in Soils and Riverside Archaeology 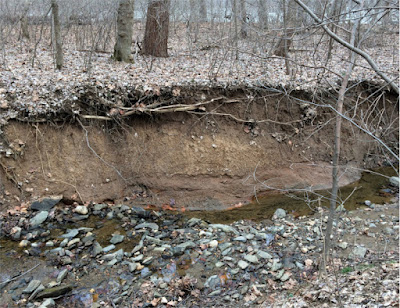 Behold this picture, which shows a stream cut through a terrace along the Potomac River. A terrace is just a stable soil built by a river depositing silt and sand over the years. In this stream cut you can see both an ancient terrace, on the order of 7,000 to 10,000 years old, and a mass of loose soil mainly put down since European farmers started plowing up the land, creating massive erosion. The old terrace is the lighter soil to bottom left; the historic sediment the dark brown to top and right. The early historic/late prehistoric ground surface is the interface between them. Along the very bottom is the gray clay of an ancient wetland. 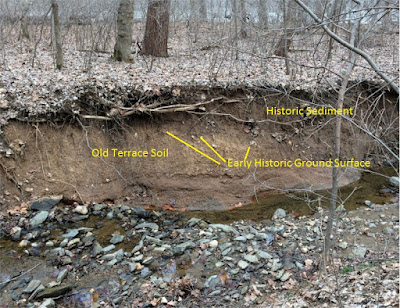 Like this. This bank is about 6 feet tall (2 m). Notice that the mantle of historic sediment has the effect of smoothing over the outline of the ancient terrace, and any others that may be present, making it hard to pick out the geology of this area from observing the surface. 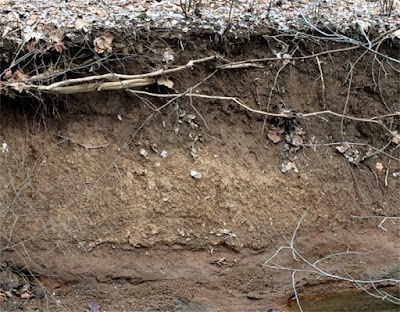 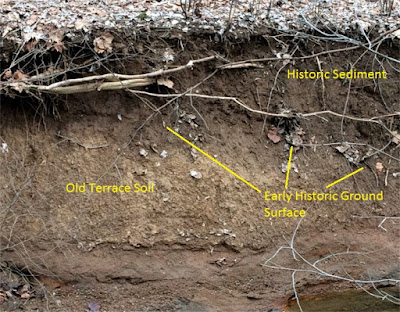 This is very important for archaeologists, because along rivers like this is the best place to study ancient American Indians or any other hunter-gatherers. If the river is building the terrace up, this can create a stratified site, separating artifacts by time period (since the older stuff is buried more deeply). So we look for sites along rivers. But river terraces can be of just about any age, from hundreds of thousands of years to fifty years. We don't want to waste our time digging in soils too recent to contain much of interest, or soils that were put down before people came to North America. So we work with soils geologists to identify soils of the right age to work in. Our geologist identified this terrace (the light colored soil) as of the right age, so we have spent the past two days digging holes along the top of it. And we have indeed found an ancient Indian site, more than 3,000 years old.
Posted by John at 7:06 PM