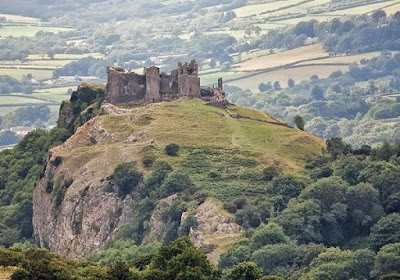 Carreg Cennen is a castle in South Wales. Legend holds that this spot was first fortified by Urien Rheged, Lord of Iskennen, and his son Owain, knights during the reign of King Arthur. 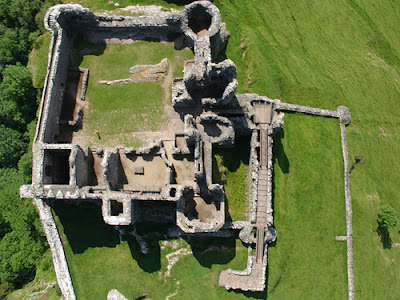 Historians think the first castle on the site was built by the Welsh Lord Rhys, Prince of Deheubarth, in the late 12th century. His descendants intermarried with their Norman neighbors, and when his descendant Rhys Fychan held the castle he was betrayed by his mother (the Norman Matilda de Braeos) who turned over the stronghold to the Henry III of England. Rhys Fychan regained control of the castle in 1248, but he was then betrayed by his uncle, Maredudd ap Rhys Gryg. Medieval Welsh history was all like that, one back-stabbing after another; reading it I always end up thinking the English conquest was exactly what the Welsh princes had coming. 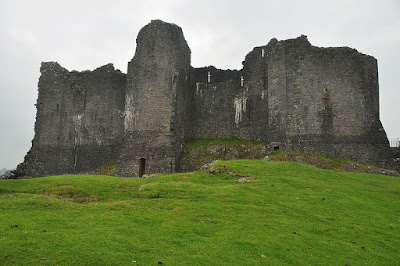 Edward I seized the castle in 1277 and granted it to John Giffard, the son of a Marcher family who had become one of his household knights.  It was Giffard and his son who built most of the castle as you see it today. 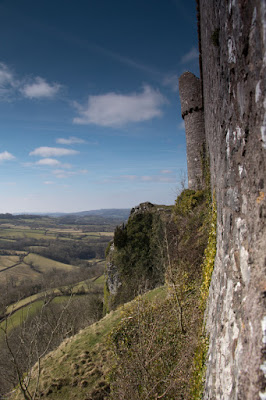 Later it passed to Edward II's favorite Hugh Despenser, and from him to Edward III's son John of Gaunt. 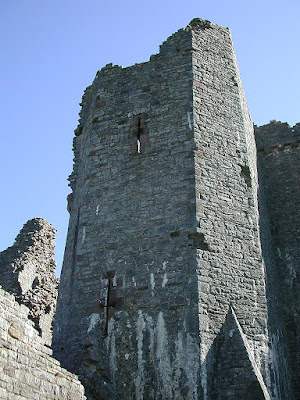 When Gaunt's son Henry Bolingbroke seized the throne in 1399, the castle became crown property. In 1403 it was besieged by the great Welsh rebel Owain Glyndŵr and 800 of his men, but he failed to take it. It was defended by a man who was to marry one of Glyndwr's daughters just a few years later, Sir John Scudamore of Herefordshire. It was a Lancastrian stronghold during the Wars of the Roses, and after the Yorkist victory in 1461 Edward IV decided it was too much of a threat, so it was partialy demolished and thereafter decayed into ruin. 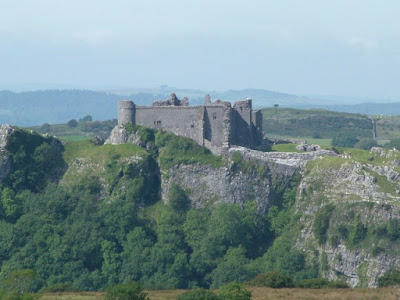 Later on it was granted to the Earls of Cawdor, and it remains in private hands. You can hire it for your wedding, should you be so inclined. 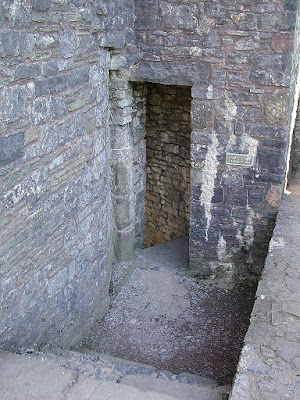 The castle's most famous feature is a sort of cave in the bedrock beneath it, accessed down this spooky stairway and then a dark, moldering corridor. The guides say the cave was used as a dungeon and that several noble prisoners were held there. and the place is so dank it would be churlish to demand proof. 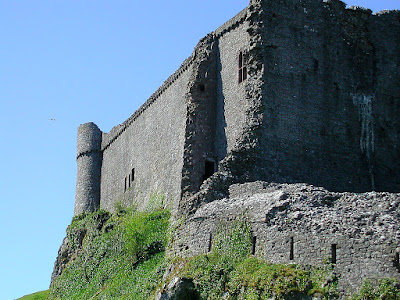 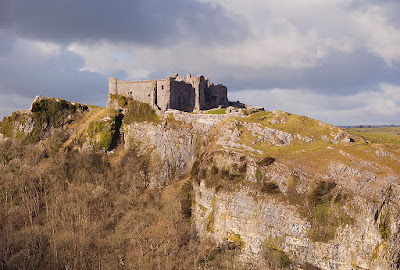