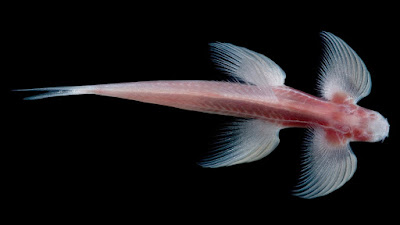 All land vertebrates descend from ancient fish called tetrapods that moved onto the land around 375 million years ago. So far as we know, this was a unique event, and all amphibians, reptiles, birds and mammals descend from one small population of tetrapods.

The fossils of tetrapods show that they moved like modern salamanders, their legs working in pairs, their bodies bending from side to side. To work their hind legs they developed a new bone structure, the pelvis, which is unknown in other fish. Other fish like mudskippers and walking catfish have adapted to move about on land, but they use different methods that seem to be evolutionary dead ends.

But now a blind fish has been identified in deep caves in Thailand that climbs up waterfalls using the same salamander gait as an ancient tetrapod. Cryptotora thamicola is a small fish with two pairs of prominent fins on the sides of its body that serve for legs. It even has a pelvis to operate the hind fins.

It's an amazing example of convergent evolution, that is, the same need giving rise to the same evolutionary changes. That this strange fish has evolved a pelvis and an amphibian gait is about the strongest possible confirmatory evidence that land vertebrates evolved in just the way paleontologists suspected.

Carl Zimmer has more at the Times, including a video of the fish moving.
Posted by John at 7:25 AM