William Dalrymple, City of Djinns: a Year in Delhi 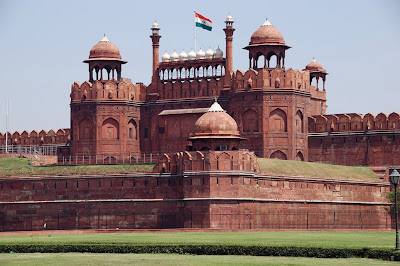 Back in 1989, young British writer William Dalrymple spent a year in Delhi. He then wrote a book about his experience, which appeared in 1993. Last month, I chanced upon it at the used book store in Dupont Circle and snapped it up. It's wonderful, and I recommend it highly. Dalrymple is a graceful writer and a very determined explorer of Indian life, and there is something interesting or amusing on almost every page of this book. My favorite parts are the conversations he records, which capture the flavor of Indian English and the personalities of the many people he meets. At a Muslim wedding, he comments to an acquaintance that the groom looks miserable:


"This is our custom," said Dr. Haidar. "We think that a groom must look little bit shy."
"He certainly doesn't look as if he is enjoying himself much."
"Maybe he is thinking that today he will loose his freedom. After this day he will be having to obey his wife."
"I thought Muslim men were always the unchallenged heads of their households."
"This thing is not true," said Dr. Haidar. "In all countries, irrespective of religion, behind the scenes the woman are ruling the men. How long have you been married?"
"One year."
"After a while you will understand," said Dr. Haidar, shaking his head sadly.

Dalrymple spends much of the book investigating Delhi's history, especially its glory days in the 17th century, under the Mughal emperors. He learns many fascinating things, and finds many survivals of the old ways, such as Sufi fakirs, eunuchs, practitioners of Galenic medicine, and men who converse with djinns. There is a sadness to this exploration, because modern Delhi is cut off from its past by the chasm of partition. In 1947, more than 300,000 Muslims fled Delhi for Pakistan, and nearly a million Sikhs and Hindus from the Punjab moved in. The old courtly culture of the city was largely destroyed, and to find men who remember the old ways and speak the city's unique dialect of Urdu Dalrymple had to travel to Karachi in Pakistan. Sometimes I wished Dalrymple had spent his year in a city with more continuity in its past.

Still, it's a fine book, and I recommend it to anyone curious about India's past and present.
Posted by John at 9:41 PM

Trust this Scot-man describe and co-relate the past and present in a refreshingly straight-forward , lucid and intelligent literary feat, that I think, no Indian writer can achieve..For all his research and his intuitive ear & eyes for details, possible only by grace of the God, I hope his services should be used by the authorities in restoring/re-telling/publicizing the forgotten monuments and places for benefit of not-only history-buffs and foreigners, but also to our own countrymen, school-children, and future generations..