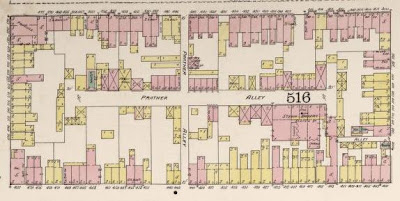 For an upcoming archaeological project in the District of Columbia, my colleague Jason and I have been researching a little place called Prather's Alley. Many blocks in Washington developed along the lines of the one shown in the map, above, from 1888. There are houses fronting on the streets, but also a little neighborhood fronting on the alley in the middle of the block. (Square 516, shown above, is south of K Street between 4th and 5th Streets NW.) 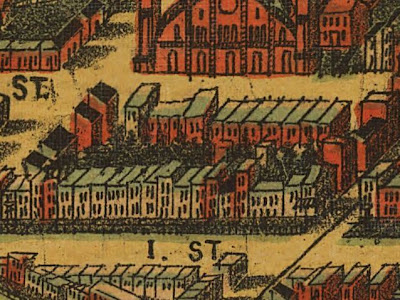 These alleys had an unsavory reputation. They were hidden from the traffic on the streets, and from the prying eyes of the police, and most of Washington's whore houses, gambling dens, and illegal pubs were in alleys. The non-criminal residents of the alleys were mostly poor black laborers and their families. Renderings of the city intended for sale to middle people, like this 1884 oblique view of Square 516, often omitted the alley houses altogether. (Here you can glimpse a couple of houses in the middle of the block, but most are hidden by trees.

Prather's Alley was no exception; in fact, it seems to have been one of Northwest Washington's centers for crime and vice. The first houses on the alley were probably built in the 1850s, and by 1862 it was appearing regularly in the newspaper. In September of that year the police raided what one newspaper called "the notorius den of Eliza Crittenden in Prather's Alley." According to this reporter, Both "black and white" girls were arrested: Mary Eaton, Mary Jane Holley, Sarah Bonds, Annie Eaton and Elizabeth McManus. This Eliza had a long career, partly, one suspects, because she kept changing her name; just two months later she appeared in the press as Eliza Miller, still operating a "bawdy house" in Prather's Alley.

Perhaps you have wondered, in some idle moment, what prostitutes say when nosy census takers come and ask them, "what is your profession?" The girls of Prather's Alley were not ashamed to tell the truth.

A few more Prather's Alley news items, all from the National Republican: 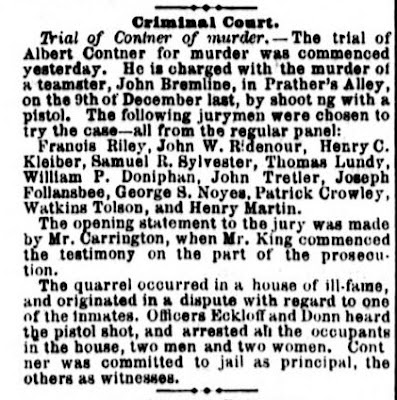 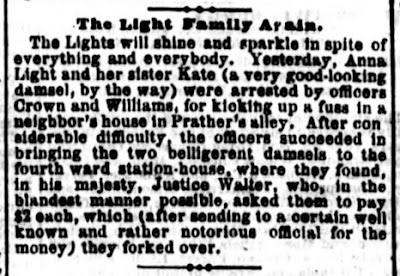