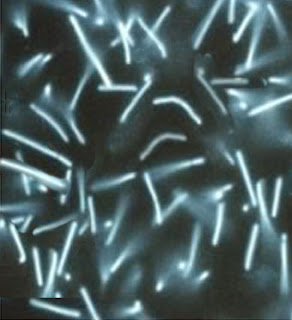 Methanogens are microscopic organisms that produce methane as a biproduct of digestion; it is the methanogens living in mammal guts that make the methane in cow burps and human farts. There are at least 50 different kinds of methanogens, but all are Archaea. (Archaea are microbes we used to classify among the bacteria, but turn out to be more different from bacteria at the biochemical level than bacteria are from us.) They are anerobes and cannot tolerate exposure to oxygen. Their basic metabolic pathway looks like this:

Methanogens are in the news because it has been discovered that they can somehow metabolize electricity. Feed direct current into a properly set up colony of methanogens, and they soak up the electricity and produce methane. This is exciting because it might be a cost effective way to store and ship electricity from remote wind or solar plants. We already have great technology for transporting methane (natural gas) and using it very efficiently, and the carbon in the methane would be coming out of the atmosphere, so burning it would not add to global warming.

So far as I can tell, nobody knows exactly how methanogens do this:


"While conceptually simple, there are significant hurdles to overcome before electricity-to-methane technology can be deployed at a large scale," said Bruce Logan, a professor of civil and environmental engineering at Penn State. "That's because the underlying science of how these organisms convert electrons into chemical energy is poorly understood."

But we know it requires communities of organisms rather than just a single species:


For the experiment, [Dr. Bruce] Logan and his Penn State colleagues built a reverse battery with positive and negative electrodes placed in a beaker of nutrient-enriched water. The researchers spread a biofilm mixture of M. palustre and other microbial species onto the cathode. When an electrical current was applied, the M. palustre began churning out methane gas.

"The microbes were about 80 percent efficient in converting electricity to methane," Logan said.

The rate of methane production remained high as long as the mixed microbial community was intact. But when a previously isolated strain of pure M. palustre was placed on the cathode alone, the rate plummeted, suggesting that methanogens separated from other microbial species are less efficient than those living in a natural community.

The amazing diversity of microbial chemistry is a reason to be optimistic about the future. Whatever it is that we need to make, there is probably some microbe that already makes it.
Posted by John at 8:31 AM

that's pretty crazy. as in crazy-cool. we have an extensive electric grid (except in, say, mississippi), so local generation of natural gas could actually be possible. that's pretty cool. further, it could be solar, and thus off-grid methane? wowww. that's so amazing.