The Archaeology of De Soto's Route 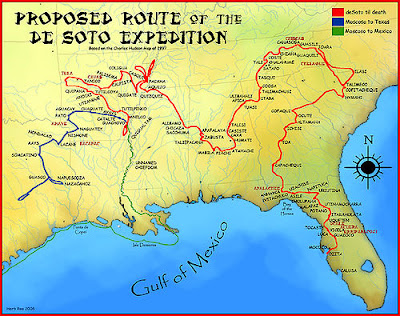 In 1539, Hernando de Soto landed at Tampa Bay in Florida with about 600 companions an embarked on an epic trek across the U.S. southeast. In May, 1541, the expedition reached the Mississippi River, which de Soto called the Rio Grande de la Florida. The next year de Soto died, probably in central Louisiana; about half of his men made it back to Spanish territory. The accounts of the expedition by de Soto's Secretary, Rodrigo Ranjel, and the King's agent, Luys Hernández de Biedma, are important sources for the Indian tribes and kingdoms of the region.

The exact route taken by de Soto's men remains highly controversial. As you can see from the map above, attempts to equate every feature in the expedition narratives with some spot on a modern map result in convoluted routes, which seem implausible to some historians. In recent years there have been several claims of archaeological evidence for de Soto's men, in the form of 16th-century Spanish artifacts. However, most of these claims are disputed. After all, de Soto traded beads and other goods to Indians along the route, and no doubt his men lost or discarded other objects. The most solid archaeological evidence of the expedition comes from a site in modern Tallahassee that has produced Spanish coins and beads of the right period. De Soto made his first winter camp at the Apalachee village of Anhaica, and some historians think the Tallahassee site is Anhaica. 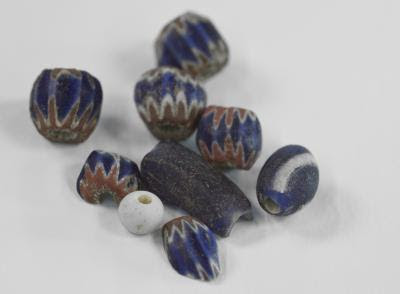 Another possible site is an Indian village on the Ocmulgee River in Georgia, where finds include nine trade beads of the right period and several small iron objects. Others area a small fort in western North Carolina and a large Indian site in Arkansas. 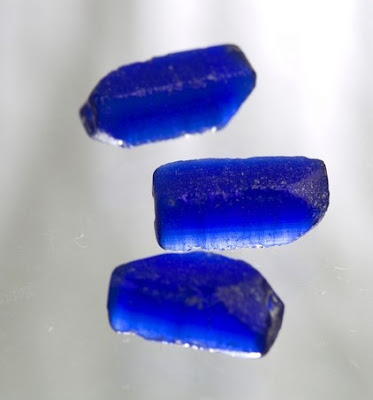 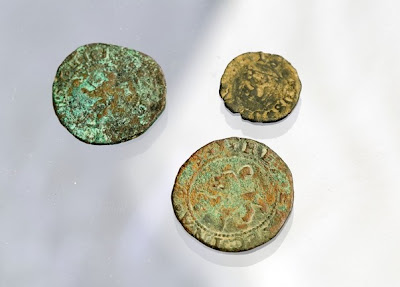 Now a claim has been made for another site in north Florida, near Orange Lake in Marion County. The finds  here include Spanish coins and blue glass beads (above).

The finding of all these Spanish artifacts, a real needle in a haystack problem, testifies to how much archaeology has now been done in North America, and how many people are fascinated the great problem of working out de Soto's route. According to some interpretations, the expedition may actually have been one of the most important events in North American history. By the 1680s, the Indian population of the southeastern US had fallen by at least 75%, and diseases introduced by de Soto may have been responsible.
Posted by John at 8:04 PM

That's wonderful news. Discovering De Soto's lost trail is a very controversial subject. But when will the State of Florida ever allow a National Memorial in Bradenton the luxury of honoring their own history including the very reason for their own existence? To say nobody has ever found anything in North America with Hernando's name on it would be an archaeological lie. I personally donated De Soto's 1539 Landing Relic to the Museum of Florida History in 2008, so why are they so afraid to officially admit the fact? At the same time it took years to come out and publicly admit Dr. White discovered a site near Ocala. Unfortunately if you don't shed light on popular opinions or that of precious reputations then history sometimes gets lost again and forgotten forever. So how many times do you have to find this Spanish Explorer's footsteps before these same people can put two and two together and come up with some sort of general consensus on the subject? For Archaeology to praise new discoveries while at the same time turn their backs on the same person being discovered makes no historical sense whatsoever? What our government did to the eligible national historic site that still has a portrait of itself hanging in our National Rotunda from an event that happened in 1541 may explain why in Florida sometimes other historical events occurred in 1539 as well and then again some people in charge of historic preservation at the Florida Department of State still want to pretend history never happened at the same time they are told to keep on commemorating it did for no logical explanation other than what I was told years ago... We can no longer be of any assistance in preserving our own past. To say now there are new answers to this whole entire question of where exactly did this Hernando step foot would be an understatement.And the sooner the truth is told in Tallahassee the better off history will be. For if you recognize a handful of crusty coins dropped by Spanish Explorers in 1539 then why not just come out and do the same thing for other historical relics dated that very same year with the Conquistador in Question's own name on them? I've argued this with De Soto Scholars for over ten years and nobody has the courage to admit that it doesn't matter where you find history, the fact that it was even ever found, this is the most important thing. And why not as an Archaeologist who traces such things simply agree here that yes history is worth saving publicly. Right or wrong?