The Paisley Caves and the First North Americans 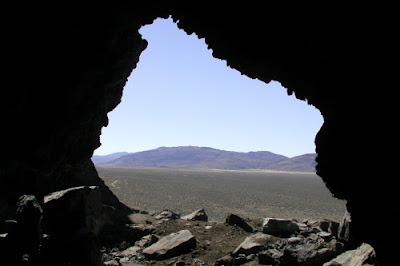 In the news today, more evidence of early human settlement at the Paisley Caves in the dry uplands of central Oregon. Since excavations resumed at the caves in 2002, fascinating finds have been made every year. That humans settled here at the end of the Ice Age seems well established, given the discovery of extinct camel bones in the trash around a hearth. But how early, and what culture is represented here, has been fiercely disputed. 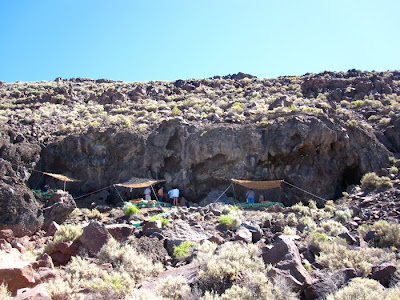 Back in 2008, the excavators shook up the archaeological world by announcing that DNA from coprolites -- fossil turds -- shown them to be of human origin, and that radiocarbon dating showed them to be around 14,200 years old. The Clovis culture, the oldest North American culture that everyone accepts, first appeared around 13,500 years ago. So the basal layers at the Paisley Caves seem to be more evidence of "pre-Clovis" humans in North America. 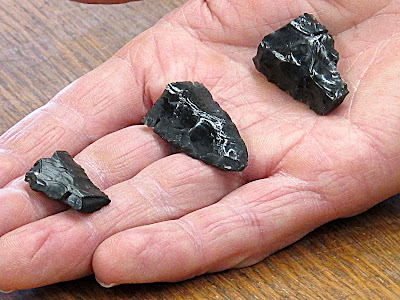 The new data published this year includes 190 additional radiocarbon dates, many of them in the same circa 14,000 BP range, and also diagnostic stone tools. The tools are quite important, because the earlier finds from the caves included lots of animal bone and numerous obsidian flakes but few tools, making it difficult to establish the culture of the residents. The new finds (above) are indisputably related to the "western stemmed" tradition, which is found across the Great Basin and was known to be quite early. If the analysis of the Paisley Caves data is correct, the widely distributed western stemmed tradition is at least as old as Clovis and possibly older. The new dates are also important, because the earlier dates were on materials from rodent burrows or other disturbances, and some people questioned the validity of the associations between the dated carbon and human artifacts. The new dates, the investigators say, are from much more intact contexts.

The site is certainly a very exciting one. But I dispute the "nyah-nyah to Clovis first" attitude of some of the pronouncements I have seen. This is probably the four thousandth time that some archaeologist has announced that his data conclusively refutes the Clovis first theory, and I still know lots of Clovis first believers. The reason the theory endures is that the extraordinarily rapid spread of Clovis -- across most of North America within 200 years, to Tierra del Fuego within 400 -- seems to demand a continent nearly empty of humans. How else could it have spread so far and so fast? Clovis seems to completely dominate wherever it appears, and all later cultures are descended from it; if there were earlier peoples, what happened to them? And, the genetic evidence points strongly to a single founder population for most Native Americans. 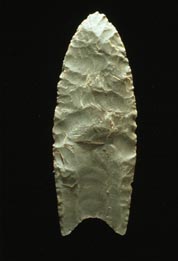 Clovis can't possibly have been the culture of the very first people in the New World,  because it is not found in Asia or Alaska and therefore originated in North America. As the Paisley cave excavators note, the western stemmed tradition is more like the stone tools of northeastern Asia than Clovis is. But I think overwhelming evidence still demands that Clovis come very early in the sequence of occupation. Radiocarbon dating is a fabulous tool, but my own experience with it is too shaky for me to ever accept any date that can't be fitted into a coherent narrative of human movements and interactions. (You can take multiple dates from the same animal and have them come back 2,000 years apart.)

I can fit the Paisley Cave data into a narrative that makes some sense to me. People arrive from Asia around 14,000 years ago, using stone tools much  like the western stemmed tradition. One group of them heads for the west coast. Another heads south, possibly to Texas (which has produced the oldest Clovis dates), where they develop the Clovis spear point and a culture that impels them to spread far and wide across the landscape. I'm no expert on the population genetics of this, so I am not sure how much time might have elapsed between the entry and the spread of Clovis. But I still believe that there can't have been many people in the continent when Clovis began its spread, and therefore that there is an upper limit to that time. Five thousand years, I think, is much too long, and even one thousand seems to me to be pushing it.

Then again, maybe the Paisley Cave data will go the way of so many other pre-Clovis claims. Time, I suppose, will tell.
Posted by John at 7:40 PM

Would like to contact the photographer of the images of Paisley Cave for possible use in a museum exhibit.