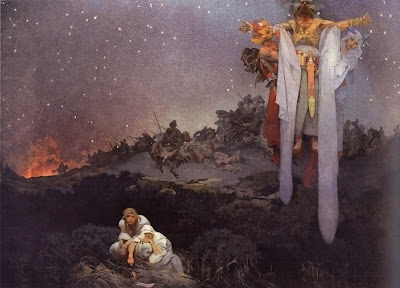 This cycle of twenty enormous paintings occupied Mucha for 18 years, from 1910 to 1928. As art they interest me a only little. What really strikes me is the narrative of European history they present, so different from the France-centered narrative that dominated my education. Above, The Slavs in their Original Homeland: Between the Turanian Whip and the sword of the Goths. "Turanian" means, roughly, Persian, and it refers to the dominance of eastern Europe by Scythians and Sarmatians in the classical era. 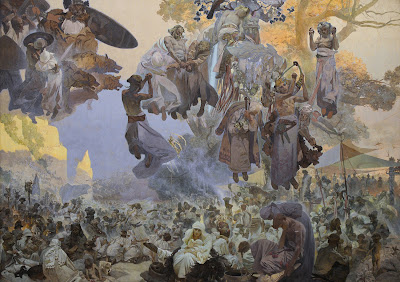 The Celebration of Svantovit. Svantovit was the Slavic god of war, also associated with the sun. This is a late romantic fantasy bearing little resemblance to life among the ancient Slavs. 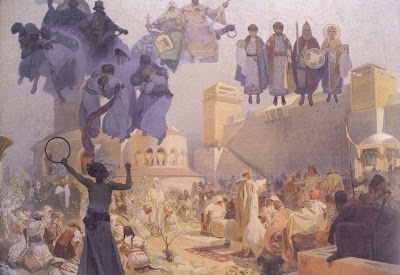 The Introduction of the Slavonic Liturgy: Praise the Lord in Your Native Tongue. Old Church Slavonic, as we call it now, was the first written Slavic language, devised in the 9th century by Byzantine missionaries under Saints Cyril and Methodius to aid in converting the Slavs. 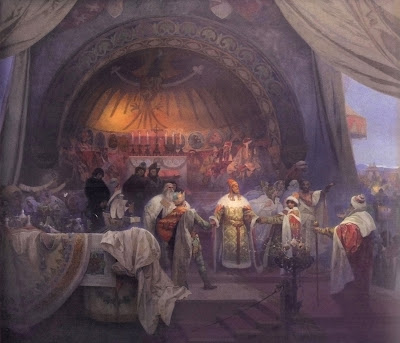 The Bohemian King Přemysl Otakar II. Ottokar II, who has the magnificent epithet The King of Gold and Iron, was king of Bohemia from 1253 to 1278, as well as Duke of Austria, Duke of Carinthia, and Duke of Styria. The listing of the medieval rulers of Bohemia as Slavic is questionable, since they spoke German and were related to the Carolingians. Medievalists will be glad to hear that Ottokar issued Charters of Privileges to at least 30 new towns; he was also a notable friend of Jews. 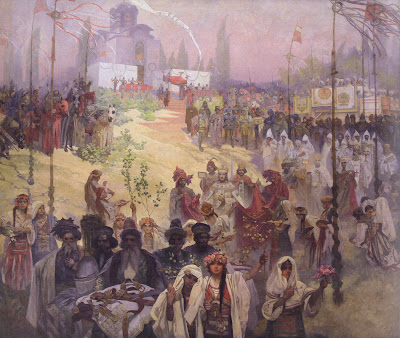 The Coronation of the Serbian Tsar Stefan Dušan as East Roman Emperor. Stefan Dušan (1308-1355) was probably the most powerful of all Serbian leaders, conqueror of a large empire in the Balkans and defeater of the Turks on several occasions. He also issued what is remembered as the first major law code in a Slavic language. 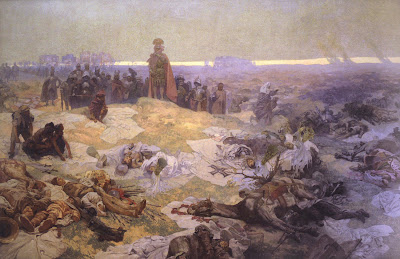 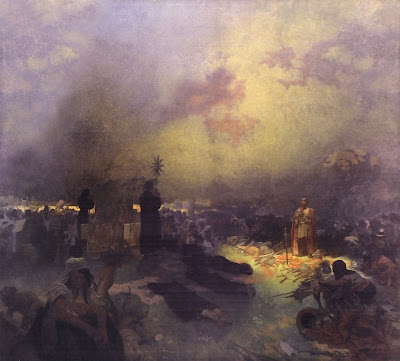 After the Battle of Vitkov Hill: God Repesents Truth, not Power. The Battle of Vitkov Hill (July 14, 1420) was part of the Hussite Wars. Jan Hus was a Bohemian religious reformer whose teachings are often seen as a forerunner of Protestantism. He harshly criticized the institution of the church, which declared him a heretic and called for a crusade against him. Hus defeated the first crusading forces and captured Prague, where his people were besieged by a large crusading army. Vitkov Hill was an outlying part of the defenses, and on this spot the defenders launched a sally that surprised and routed a much larger force, effectively breaking the siege. Mucha was very much interested in the Hussites, and they also figure in two other paintings. 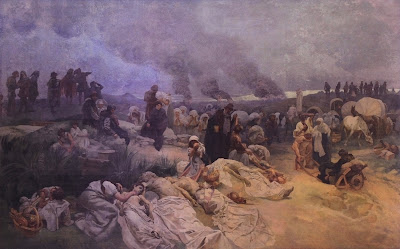 Petr Chelčický at Vodňany: Do Not Repay Evil with Evil. Petr Chelčický (c. 1390-1460) was a Bohemian religious thinker and pacifist, who called for the use of nonviolent non-compliance in establishing the true church. 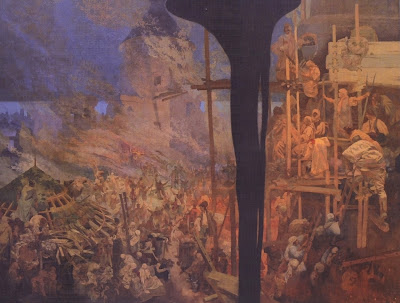 Defense of Sziget against the Turks by Nicholas Zrinsky. The fortress of Sziget blocked the route of Turkish armies advancing toward Vienna. In 1566, Sultan Suleiman the Magnificent besieged the fortress with a huge army, intending to take it quickly and march on the Hapsburg capital. But a force of 2,300 Hungarians and Croats defended the castle for months; 20,000 Turks died, including their Sultan, and the Turks did not threaten Vienna again for more than a century. The defense of Christian Europe against the Turks still looms large in the Slavic conception of their history. 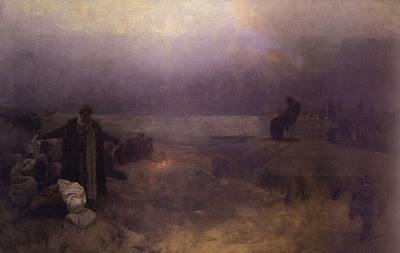 The Last Days of Jan Amos Komensky in Naarden. Komesnky, or Comenius as he is usually known in English, was one of the leaders of the Moravian Brethren in the 17th century and an early promoter of universal education. List of all the paintings here, with historical links; you can find all the images here.
Posted by John at 8:35 PM

Excellent summary of some of the salient pieces in the cycle. You should do the whole thing!