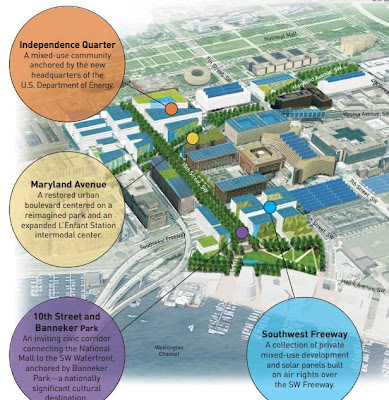 There is now a complete draft plan for the "Southwest Ecodistrict" in Washington, DC. As I said before, this ghastly wasteland, so close to the Mall, well served by Metro and commuter trains, is a prime opportunity for some sort of new development. There is a lot to like in the new plan, too. Tenth Street, now barren and ridiculously wide, would become a tree-lined street with small parks and market stalls, creating a fun way to walk from the Mall to the Potomac waterfront. The wound created by the Southwest Freeway would be partly closed by building condominiums right over top of it. 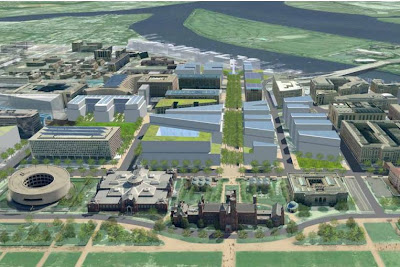 Banneker Park, at the south end of Tenth Street, would be redeveloped. Maryland Avenue, now a scary ravine, would become a pleasant urban boulevard extending from the new Eisenhower Memorial across the district. Some of the dead space around the horrid Federal office buildings would be sacrificed to enlarge the buildings, so that there would be 2 million square feet of new office space. 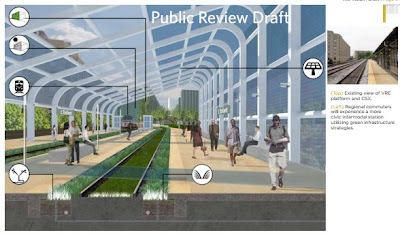 L'Enfant Station would be remodeled into a bigger, more pleasant "multimodal transportation hub."

What I dislike most about the plan is its notion of putting two blocks of solar panels over top of the Southwest Freeway, part of their scheme to make the plan "energy neutral." There are just better ways to use scarce, valuable downtown space.
Posted by John at 1:03 PM