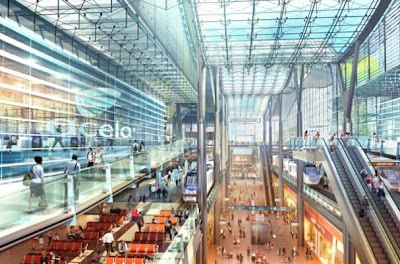 Amtrak has long-term plans to upgrade its northeast corridor tracks for real high speed trains, a project that I whole-heartedly endorse. Travel time from Washington to New York would be cut to 94 minutes, down from 160 minuted today. This would require upgrades to all of the major rail stations from Washington to Boston. An early-stage plan for Union Station in Washington has just been released, and it is quite ambitious, with a preliminary price tag of $7 billion. The  heart of the plan is the addition of 6 new tracks for high speed trains, and the platform and corridor space to handle more people. 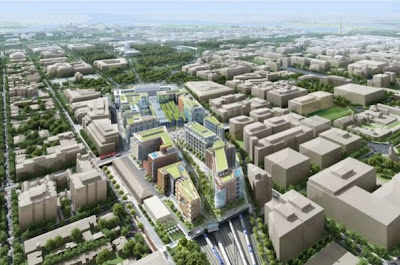 Union Station is roughly the southeast corner of the booming NoMa neighborhood, which means that its rail yard now occupies very valuable space. The plan envisages building a whole complex of office or retail buildings over the yard. The sale or lease of the space would, I assume, earn back a couple billion of the total cost. Meanwhile the station would be greatly expanded, adding more retail and restaurant space. 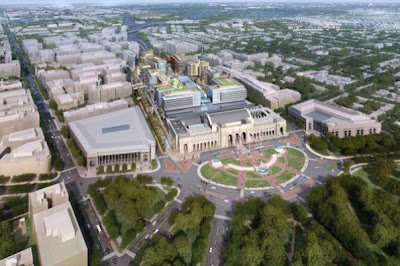 As you can see from this rendering, the old facade and front hall of the station would remain intact, and most of the new construction would be behind it, in the area now occupied by platforms and the yard.

If only we could have back the hundreds of billions squandered in Iraq; think of the investments we could have made in America with that money.
Posted by John at 7:41 AM