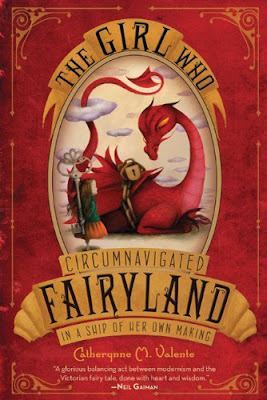 Catherynne Valente's delightful fairy tale lifted my spirits like few books I have read this decade. The Girl Who Circumnavigated Fairyland in a Ship of Her Own Making tells the story of a twelve-year-old girl named September, who is carried off from Omaha to Fairyland by a flying leopard and the Green Wind, there to see amazing things and have adventures befitting the heroine of such a tale. The plot is nothing remarkable, though it is fine enough. What makes the story remarkable is the words. The text is a gigantic wedding cake of language, studded with beautiful phrases and striking images, all overwrought to just the right amount for a fairy tale. In the future, I will judge all other attempts to write the language of fairy tales by this one. Consider this passage, which appears just after September crosses between worlds:


In Omaha, signposts are bright green with white writing, or occasionally white with black writing. September understood those signs and all the things they pointed to. But the signpost before her now was made of pale wind-bleached wood and towered above her: a beautiful carved woman with flowers in her hair, a long goat's tail winding around her legs, and a solemn expression on her sea-worn face. The deep gold light of the Fairyland sun played on her carefully whittled hair. She had wide, flaring wings, like September's swimming trophy. The wooden woman had four arms, each outstretched in a different direction, pointing with authority. On the inside of her easterly arm, pointing backward in the direction September had come, someone had carved in deep, elegant letters:


TO LOSE YOUR WAY

On the northerly arm, pointing up the tops of the cliffs, it said:


TO LOSE YOUR LIFE

On the southerly arm, pointing out to sea, it said:


TO LOSE YOUR MIND

And on the westerly arm, pointing up to a little headland and a dwindling of the golden beach, it said:


TO LOSE YOUR HEART

Or this, as September stares into a witches' cauldron:


September let go a long-held breath. She started into the roiling black-violet soup, thinking furiously. The trouble was, September didn't know what sort of story she was in. Was it a merry one or a serious one? How ought she to act? If it were merry, she might dash off after a Spoon, and it would all be a marvelous adventure, with funny rhymes and somersaults and a grant party with red lanterns at the end. But if it were a serious tale, she might have to do something important, something involving, with snow and arrows and enemies. Of course, we would like to tell her which. But no one may know the shape of the tale in which she moves. And, perhaps, we do not truly know what sort of beast it is, either. Stories have a way of changing faces. They are unruly things, undisciplined, given to delinquency and the throwing of erasers. This is why we must close them up into thick, solid books, so they cannot get out and cause trouble.

If you know a girl who loves stories, get her a copy of this right away. If you don't have a girl handy to share it with, and love stories yourself, read it anyway -- I won't tell anyone.
Posted by John at 5:50 PM