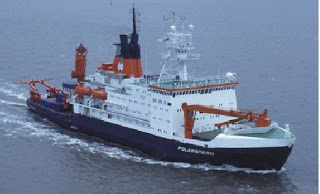 Recent experiments in fertilizing the ocean have been focused, not on creating ecosystems, but on absorbing carbon from the atmosphere and sinking it to the bottom. The latest publication in the field describes an experiment undertaken in 2004 by mainly German researchers aboard the research vessel Polarstern. They mixed 14 tons of iron sulfate with sea water and spread it over 167 square km (65 sq miles) of open ocean, then monitored the ensuing plankton bloom for 37 days.

The effect of this intervention was dramatic; 14 tons of iron sulfate is a tiny amount, and yet it led to a bloom lasting weeks. According to the researchers' calculations, "Each atom of added iron pulled at least 13,000 atoms of carbon out of the atmosphere" by encouraging plankton to grow and photosynthesize. The tricky part was figuring out what happened to the carbon after the plankton died, and it seems the publication of the results was held up for years while the scientists argued about it. Their final conclusion is that at least half of the carbon soaked up by the plankton sank into the deep ocean, below 1000 meters, where it will probably stay for centuries.

So the notion of creating oceanic plankton blooms to soak up carbon has some potential. But I am still fascinated with using this technology to turn nearly empty stretches of ocean into highly productive ecosystems, which might sink some carbon but would also fill with fish and whales.
Posted by John at 8:08 AM